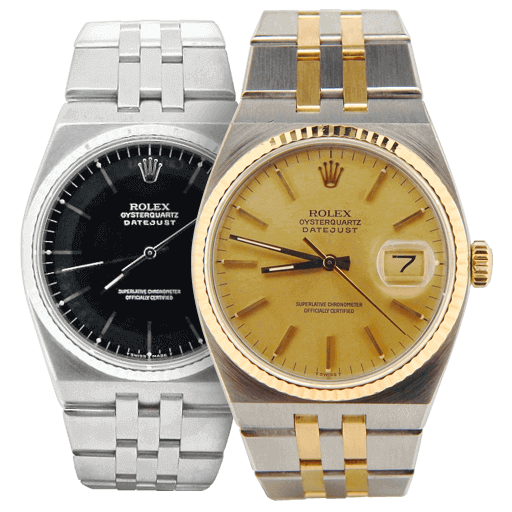 BeckerTime’s selection of Rolex Oysterquartz mens preowned watches sized 36mm come in a combination of yellow gold and stainless steel with integrated bracelets. We think you will agree, this watch is perfect for any occasion. Also, we are confident that you will find a Oysterquartz timepiece to fit your style and budget. Keep in mind, each purchase comes with a 30-day money-back guarantee, free U.S. shipping, and available financing. Also enjoy our Lifetime TradeUp Guarantee on qualified items. We also strive to deliver a first-class buying experience and 100% customer satisfaction. So, contact us if we can assist you.

The Most Popular Rolex Watches of the 1970s

As the 1970s began, Switzerland’s almost total dominance of the watchmaking industry was suddenly faced with its biggest challenge to date. Since the end of WWII, they had been enjoying a virtual monopoly, producing mechanical wristwatches that were so far in front of any other nation in terms of style, innovation and accuracy that they commanded somewhere in the region of ninety percent of the market.

Ironically, it was the country’s spirit of constant invention that brought their industry to within a whisker of destroying itself. Shortly following the war, a Swiss engineer named Max Hetzel, working for Bulova, pioneered a new type of watch, with an electronically charged tuning fork powered by a 1.35-volt battery replacing the balance wheel. Called the Accutron, it was released commercially in 1960, ushering in the first rumblings of what was to become known as the quartz crisis.

Mechanical watches were a product of their time. Enjoying their heyday in the fifties and sixties, their technology remained at the cutting edge throughout the post-war era and into the jet age.

The seventies were altogether different. America had conquered the moon, the world was deep into the space age and even the remarkable engineering present inside Switzerland’s finest marvels was starting to look a little old fashioned. People were demanding more precision, more convenience and lower costs.

Enter quartz. An abundant natural crystal found all over the world, its unique properties had been attracting the interest of watch manufacturers for almost a decade before any major breakthrough occurred—in particular, the mineral’s piezoelectric effect, its ability to vibrate at a definite frequency when an AC voltage was passed through it.

Several prototype watches had emerged, from Europe, America and Japan, all looking to address the inherent limitations of mechanical calibers; namely, the inaccuracy of an unwinding spring when compared with that of an electronic movement, no matter how painstakingly engineered that spring might be.

Along with better timekeeping, quartz also had mechanics beaten in the robustness stakes, as the oscillating movement of the traditional balance wheel was always at the mercy of temperature shifts, the effects of magnetic fields or shock. Removing the balance wheel and substituting it with crystals also removed the problems. In addition, quartz watches needed no costly servicing and their batteries lasted for years and were easily and cheaply replaced.

Switzerland, for the first time, was caught napping. Even though it was one of their own countrymen who had laid the foundations for the new technology, quartz watches were seen by many in the industry as a passing fad. As the fad did anything but pass, and the benefits of these relatively inexpensive and extremely accurate timepieces saw them explode in popularity, a consortium of twenty Swiss manufacturers was formed, called the Centre Electronique Horloger (CEH). A research organization, it was charged with developing quartz movements to allow the home of mechanical watchmaking excellence to compete in the electronic market.

While the CEH, which counted Rolex as one of its major shareholders, experienced a certain amount of success, the damage had already been done. The quartz crisis acted as a virtual cull of the Swiss watch industry, bankrupting two thirds of the country’s manufacturers.

In 1970, the first movement produced by the CEH was launched. The Beta-21 powered watches from sixteen different companies, including Rolex, who fitted it inside what was, for the time, an enormous 40mm case. Officially known as the Rolex 5100 Beta-21, its dimensions and the fact that it was only released in 18k yellow gold saw it quickly nicknamed The Texan.

While the watch was a huge success for Rolex, with the limited run of 1,000 selling out before production even began, the new movement was less well received. Large, ungainly and above all, expensive, the Beta-21 seemed to miss the whole point of quartz technology, and the much cheaper and just as accurate watches from Japan and America continued to decimate the Swiss firms.

More importantly for Rolex, the awkward shape of the movement meant it couldn’t be shoehorned into an Oyster case, the very element upon which they had built and maintained their peerless reputation. The 5100 became their most technologically advanced and costliest model, its modern tonneau styling and round dial signifying a considerable design departure for the brand. It was also the first watch to be launched by Rolex featuring a sapphire crystal and Quickset date function.

However, after the initial sensation, interest in the 5100 quickly died off and it was discontinued in 1972, the same year Rolex parted ways with the CEH in order to do that most Rolex-esque of things; develop their own quartz technology.

Never a company to be rushed, it took them five years. In 1977, two brand new and completely unique quartz calibers were introduced—the Cal. 5035 for the Datejust ref. 17000 and the Cal. 5055 for the Day-Date ref. 19018. After decades spent in the obsessive pursuit of traditional watchmaking perfection, these 11 jewel, analogue thermocompensation quartz movements were, and still are, the most accurate calibers Rolex has ever made.

It was five years of research, design and testing well spent. With a 32khz oscillator and the latest in CMOS semi-conductor technology, Rolex’s first and only in-house quartz movements were certified to COSC chronometer standards of +/- .07 seconds a day. Even their own mechanical calibers, recognized as some of the best in the world, couldn’t get close.

The watches themselves, while bearing familiar names, looked very different from their traditional counterparts. Andre Heiniger, Rolex’s second CEO and the man most credited with making the company what it is today, was adamant his quartz pieces should bear as little resemblance to the originals as possible. While they were now housed in Oyster cases, both watches became even more sharp and angular than the original 5100, bearing more similarities with the AP Royal Oak than the graceful curves of Rolex’s signature style. The solid link integrated bracelet further distanced quartz design from the mechanical.

Further proof of the brand’s reluctance to engage with the revolution any more than was absolutely necessary is found in the number of these watches made. Whereas for the last 40 years, Rolex have produced somewhere around one million mechanical pieces a year, between the Oysterquartz’s launch in 1977 and its eventual demise in 2003, only 25,000 examples passed through the factory gates.

The two references sold fairly well, helping Rolex weather the storm that was swallowing up so many of its contemporaries in the seventies. A big draw for consumers was the watch’s relatively affordability.

The labor intensive nature of constructing mechanical calibers, requiring watchmakers who are equal part scientist and artisan, puts an unavoidable premium on the cost of manufacture. With quartz movements, this assembly is much less intricate, leading to a corresponding drop in price. While this was good news for potential customers, the reduced profit margins made them unpopular with retailers, who stocked them only out of sufferance.

It would be fair to say that the only thing Rolex do better than making watches is selling watches. Their marketing strategy is held up as the most consistently effective of any luxury brand.

By their own standards, the marketing of their quartz models was fairly lackluster. One of the better examples of them pushing the positive attributes of their new calibers happened in 1978, when Oysterquartz watches accompanied Reinhold Messner and Peter Habeler as they became the first men to climb Everest without additional oxygen.

It was a neat dovetail with Hillary and Tenzing’s achievement 25 years previously, also wearing Rolexes, as well as going someway to dispel the public notion that quartz movements were more fragile than their mechanical equivalents.

Even so, it was obvious that Rolex was merely treading water with quartz technology, just waiting for the resurgence in demand for traditional watchmaking. While they continued to produce prototype quartz movements throughout the seventies and eighties, including smaller calibers for the ladies range, only one, the 6621 found inside some of the Cellini range, ever went into mass production.

The extreme rarity and unusual quirks of the quartz Datejust and Day-Date have made them highly desirable among hardcore Rolex collectors. Probably the least well known of any of the vintage models, their scarcity makes them extremely tricky to find.

Coming from some of the darkest days for the Swiss watchmaking industry, Rolex’s quartz watches are a bona fide slice of horology history.

The Curious Rolex: The Oysterquartz

As far as watchmakers go, Rolex has certainly made a name for themselves as a manufacture of fine automatic mechanical movements. Self-winding Rolex Oyster Perpetual movements are prized—among other things—for their reliability, robustness, and serviceability. However, unbeknownst to some, tucked away in the Rolex archives are a few quartz models. Yes, that’s right, there is such thing as Rolex quartz watches. Intrigued? Read on to discover the origins, development, and departure of the Rolex Oysterquartz.

The Oysterquartz Story Begins with the Beta 21

In the early 1960s, about 20 top Swiss watchmakers, including Rolex, Patek Philippe, and Omega, formed the Centre Electronique Horloger (CEH) consortium. The goal of the group was to research and develop a Swiss quartz movement good enough to equip the watches of these famous watch brands. In 1969, the Beta-21 made its debut. Soon after, the Swiss watch houses launched their quartz watches to the public.

One of these Rolex quartz watches was the Rolex ref. 5100—the brand’s first quartz watch and the predecessor of the Oysterquartz. Rolex eventually left the CEH in 1972 with the objective to create better quartz movements in-house. 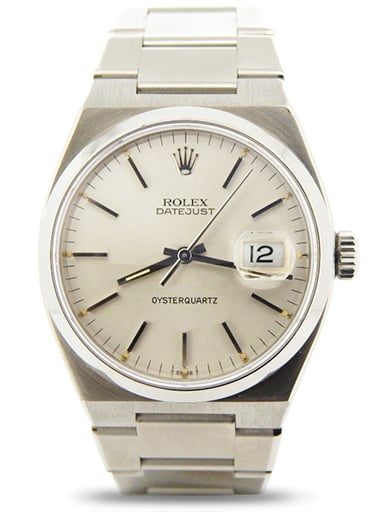 After five years of development, Rolex unveiled a pair of in-house quartz calibers in 1977. One of them was the Rolex Caliber 5035 quartz movement for the Oysterquartz Datejust.

The manufacturing of the Oysterquartz Datejust was eventually discontinued in the early 2000s and the model made its last appearance in the 2003 Rolex catalog.

Identical to its mechanical sibling, the Oysterquartz Day-Date also includes the pair of day and date windows at 3 and 12 o’clock respectively. But this time, the watch runs on the Rolex Caliber 5055 quartz movement. It’s worth mentioning that both Rolex Caliber 5035 and 5055 quartz movements are COSC-certified as indicated by the “Superlative Chronometer Officially Certified” label on the dials.

Where Are the Rolex Oysterquartz Watches Now?

Since Rolex no longer produces Oysterquartz watches, they can only be sourced from the secondary market. But, it’s interesting to note that despite its 25-year manufacturing span, less than 25,000 Oysterquartz watches—both Datejust and Day-Date varieties—were ever made. Making this curious Rolex a not so common model to find. However, you can find a great selection of pre-loved Rolex Oysterquartz mens timepieces today at BeckerTime.

An important piece of both Rolex heritage, as well as horological history at large, the Oysterquartz gives us a glimpse of how Rolex handled the Quartz Crisis that almost toppled the Swiss watch industry.