A gold Rolex watch has long been a potent symbol of success and achievement. They have also long been fairly costly.

Starting way back in the 50s, the brand sought to address the price issue, and get their creations onto more wrists, by releasing gold shell watches.

These were pieces with stainless steel cases, covered in a layer of gold around 240 microns thick, which was then pressure formed, hammered and soldered into place.

Rolex, with that famously madcap Swiss sense of humor, sometimes referred to these models as ‘golden eggs’ in their advertising, and the process was likewise used by other manufacturers such as Omega and IWC.

The Most Affordable Option

The gold shell watches were a more attainable middle ground between the utilitarian steel models and the all-out opulence of solid 18k.

With such a thick coating of precious metal, these pieces were still certainly not cheap, but they were a definite step up from other methods of achieving similar results, such as plating. Treated with a layer of gold as thin as 10-20 microns, gold plated watches were particularly susceptible to scratches that would expose the base metal underneath.

The gold shell process, otherwise known as gold cap, offered a far higher level of durability, and Rolex used it on models such as the Oyster Perpetual, the Date and the Air-King.

At Beckertime, we have a wide selection of these gold shell watches, offering a heap-full of vintage charm at a much more affordable price point.

The Air-King has a long and storied history in the Rolex saga. One of a series of ‘Air’ watches made on the instruction of company founder Hans Wilsdorf, they were built to commemorate the heroics of Britain’s RAF during the Second World War.

While the rest of the range, the Air-Giant, Air-Tiger and Air-Lion, quickly fell by the wayside, the Air-King has been in almost constant production since 1945, with only a brief two-year hiatus from 2014-2016. 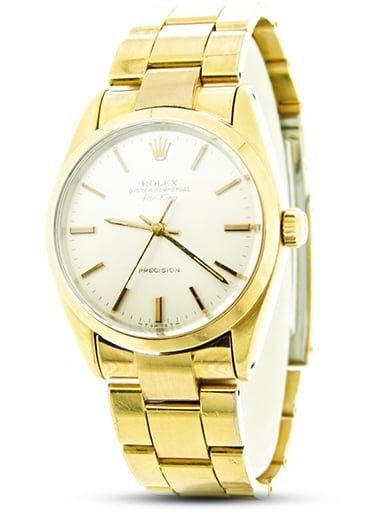 The watch stands as one of the most enduring designs in the whole of Rolex’s lineup, and none more so than the iconic ref. 5500. Debuting in 1957, the ref. 55XX series went on virtually unchanged for an incredible 37 years.

Also available in steel and Rolesor versions, between 1974 and 1986 a tiny handful were produced in gold shell, the ref. 5520, and they are a particularly rare find on the vintage market.

Throughout the ref. 5520’s life, it retained the Air-King’s traditional 34mm dimensions—an unusually large size for a watch born at the end of the war, but especially small by today’s standards.

It was powered exclusively by the Cal. 1520, a non-COSC rated movement, which led to all examples of the gold shell Air-Kings having the ‘Precision’ tag on their dials, rather than the ‘Superlative Chronometer Officially Certified’ we are more used to seeing today.

As a watch, the ref. 5520 was simplicity itself, as was the whole of the Air-King series. Fitted with a smooth, clean bezel, the face was also as straightforward as could be, with stick markers and pencil hands. A time-only piece, it had no complications to distract attention and it was issued with a small choice of dial colors, including black, champagne and silver.

One of the most understated icons in Rolex’s history, it is the perfect vintage dress watch, with plenty to appeal to both male and female audiences.

Often confused with the omnipresent Datejust, for obvious reasons, the Rolex Date is something of an enigma in the brand’s family. 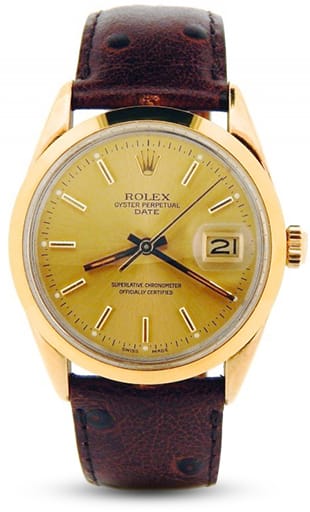 At 34mm, it is slightly smaller on the wrist than the customarily 36mm Datejust, although visually you would be hard pressed to spot any difference. It was also made available in fewer combinations of bezel, metal and dial type, with the range staying more under the radar than its bigger stable mate. There are solid gold and Rolesor versions, but the majority were issued in stainless steel.

Many see the watch as more a continuation of the Oyster Perpetual line, the series that started life in the 1920s and first put Rolex on the map, upgraded with a date function and Cyclops lens.

Whether you consider it a smaller Datejust or a fancier Oyster Perpetual, it doesn’t really matter. It, like the Air-King above, came with a gold shell variant, firstly in the form of the ref. 1550.

Launched in the early 1970s, the ref. 1550 was powered by the Cal. 1575, one of those movements that makes hardcore Rolex fans go all misty-eyed. The third generation of Rolex’s famed 1500 series of calibers, it introduced not only a higher frequency than its predecessor, at 19,800bph, it also brought with it the convenience of a hacking function. Now, setting the time could be achieved more accurately by pulling out the crown and stopping the seconds hand. 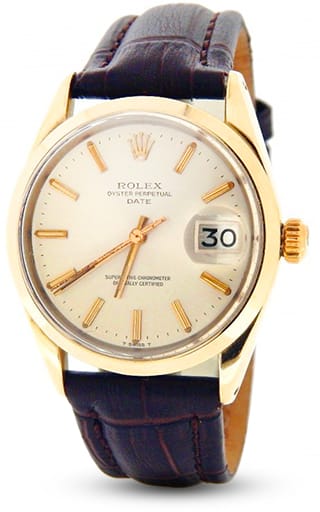 When the ref. 1550 was itself replaced towards the end of the decade, becoming the ref. 15505, it was driven by the new Cal. 3035—the engine which introduced the now-standard Rolex 28,800bph frequency, as well as being the first automatic mechanical caliber with a Quickset date function.

Both references were ideal candidates for the stealthy luxury of gold shell construction. Not so much the entry-level Rolex, but rather the next stage up, the Rolex Date deserves a golden finish, and coating rugged stainless steel with a thick layer of it is the perfect compromise between appearance and price.

Today, both watches represent excellent bargains and a surprisingly inexpensive gateway into the world of truly fine vintage collecting. A fascinating slice of history that can be worn every day, the Rolex Date is a timeless brand emblem.