While it may be relatively slow about it, Rolex is an ever evolving company.

Processes, technologies and materials change and improve over time, many innovated by the manufacturer itself. The ones that best capture the essence of what the brand is trying to achieve are adopted, while those which have run their course are retired. 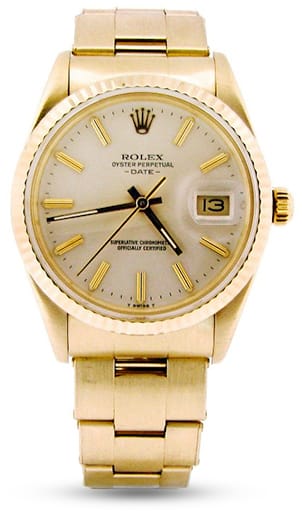 This particular member of the ref. 150XX series of the Date is a case in point. The 34mm example of the all-conquering “Datejust” family, which loses the last half of its name for reasons known only to Rolex, it was released in 1983. Mirroring its bigger 36mm brother in everything from looks to functionality to engineering prowess, its slightly reduced dimensions meant it was often disregarded in its time. These days however, the Date range as a whole is being seen as the perfect unisex watch—the ideal size for both men and women.

But the ref. 15037 was the last of the Date collection to be forged from 14k yellow gold. It was launched during the time of the quartz crisis, a period when Rolex realized it wasn’t going to be able to compete with the new electronics in terms of price or accuracy. Instead, they set about reinventing themselves as the ultimate luxury lifestyle brand, and a part of that included using only the finest metals. When the ref. 150XX gave way to the ref. 152XX just five years later in 1988, only the more expensive 18k gold was deemed good enough.

That leaves the ref. 15037 as one of the least expensive ways of getting a gold Rolex on your wrist, its aesthetics indistinguishable from the purer metal, but the big difference showing up in the price tag.

In addition, it has all the welcome retro touches to appeal to vintage collectors, but houses a caliber with the best of the modern elements.

Below, we explore in a bit more detail.

That is an alloy of 58.3% gold, blended with other metals such as zinc, nickel and copper to increase its strength and hardness. By comparison, 18k, which was sold primarily in Europe at that time, contains some 75% gold.

While that makes it a more pure metal, it is actually the 14k which has added durability, with gold on its own being fairly soft.

It also explains why there are a decent number of 14k Rolex Date watches on the preowned market, which is another reason they are so attractively priced.

The ref. 15037 is yellow gold from head to toe, everything from the case, bezel and crown to the bracelet. Definitely an attention-grabber, its smaller 34mm size prevents it from being too overpowering.

As is common with all-gold Rolex pieces, the surround is the fluted style, featuring a series of tooth-like ridges around the circumference. One of the oldest types of bezel from the brand, it is a classic aesthetic and catches the light beautifully.

Other examples in the ref. 150XX series include the ref. 15038 (the 18k version), the ref. 15000 and ref. 15010 (both steel, with smooth and engine-turned bezels respectively) and the ref. 15053, a Rolesor model; Rolex’s own term for a steel case with gold surround, winding crown and central bracelet links.

For the vast majority of their output, Rolex’s basic designs have been nailed down for decades and all that’s left to do is update the internals.

That is certainly true with the Datejust series as a whole, one of the longest—running of any of the brand’s watch ranges. Stand the debut model up next to the contemporary piece and you will see not much has changed, or needed to, for more than 70-years.

The movements, however, have been kept right on the cutting-edge. They have been revised continuously, with each new caliber granting the watch a fresh reference number.

The ref. 150XX series replaced the ref. 15XX, with a change in mechanism from the Cal. 1575 to the Cal. 3035. In truth, the two have far more similarities than differences, with the incoming movement sharing the same underlying architecture, but with a couple of improvements in accuracy and convenience.

It gives the familiar eight ticks per second glide to the seconds hand which is a brand emblem, and also provides for greater timekeeping precision and better shock protection.

And the other major introduction was the Quickset. This allowed for the wearer to be able to forward the date by using just the crown, rather than having to wind the main hands through 24-hours.

Other than that, the Cal. 3035 is routinely described as the high beat Cal. 1575, in that the two are more or less the same besides the faster speed.

Rolex’s own Microstella regulation system was carried over, as were the free sprung balance and the hacking function, which stops the seconds hand when the crown is pulled out to make setting the time easier and more accurate.

Impressive though it was however, the Cal. 3035 had one of the shortest runs of any Rolex caliber, being superseded itself in 1988 by the Cal. 3135—a movement made so well you will still find it inside the current Date watches.

The dial color found most often on yellow gold Rolex watches, especially from the more dressy examples in the Classic Collection like the ref. 15037, is champagne. Matching the tones of the case and bracelet exactly, it gives the impression of wearing a solid gold ingot on your wrist. 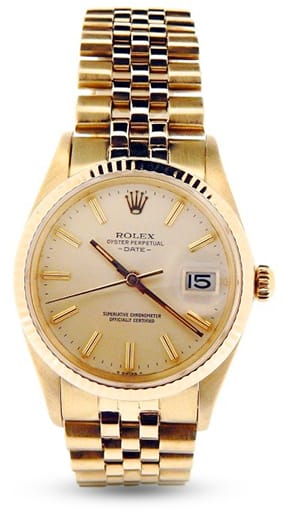 The Date models actually received fewer options when it came to dials than the regular Datejust. There were none of the exotic materials regularly seen with the full size model, such as mother-of-pearl or lapis lazuli, for example.

The most common, after the gold, were fairly conservative shades such as black, white and blue.

Hour markers, again, are pretty standard. Plain stick batons are plentiful, followed by Roman numerals, usually found on the white dial versions. You are unlikely to come across any diamonds or other precious stones accenting the indexes, and any you do see will probably be custom-fitted after the fact. These modified pieces can offer a great deal more choice than the officially released watches, but you will have to bear in mind that Rolex will likely refuse to service your watch should you send it off to them. Any maintenance will have to be carried out by an independent center.

The luminescence on this generation of the Date is tritium, a slightly radioactive substance but at a very low, and safe, level. It was a replacement for the former radium, which was proven to be harmful in the 50s and 60s.

Finally, protecting the dial is a real collector favorite, an acrylic crystal. This would be the last series to use it before it was substituted for the modern sapphire type.

In keeping with the overall top-of-the-line nature of the ref. 15037, the bracelet it was most often fitted with is the superbly supple five-link Jubilee, again in 14k yellow gold.

Originally designed for the inaugural Datejust reference in 1945, it is arguably the dressiest of Rolex’s trio of metal band options.

Alternatively, the three-link Oyster lends an altogether sportier aspect, or the watch does suit a leather strap particularly well.

With its smaller dimensions, the lug width on the Rolex Date drops down to 19mm from the Datejust’s 20mm, but the whole of the ref. 150XX series maintained lug holes on the case (while on the 36mm DJ they were slowly phased out during this era) which makes swapping and changing bracelets that much easier.

Although the brand was working hard on improving their bands in the 80s, this was still before the time of all solid links. So only the outer links on the ref. 15037’s Jubilee links were solid, while the center ones were still hollow. If you are only used to the modern-day Rolex bracelets, you will likely notice a significant drop in weight with the vintage examples, something which can be both a benefit or a disadvantage, depending on your point of view.

The Rolex Date ref. 15037 is an especially handsome, all-gold watch, available for a surprisingly attainable price.

That makes it an enticing option as both a dress piece and an everyday wear, one that will last a lifetime and continue to look great.

For a look at some of the best preowned examples, head over to our online store.