The 34mm version of the Rolex Datejust, forever known simply as the Date for some reason, has a history of production almost as long as its bigger brother.

In fact, there were just five years between debuts; the 36mm Datejust starting life in 1945, the Date in 1950.

Throughout the earlier parts of their respective runs, the two mirrored each other’s developments exactly, receiving new upgrades and redesigns simultaneously. It wasn’t until the mid-70s that the smaller watch started to lag behind, having to wait to be issued with modernized movements which were already in service in the Datejust.

The Date has never sold in as great a number as the full size model, and its dimensions have historically left it in that ‘neither-one-thing-or-the-other’ halfway point—traditionally too small for a man’s wrist but a little on the large side to qualify as a ladies piece.

However, that was then. Now, with the trend in sizes coming full circle—more restraint being prized by a male audience and women wearing larger watches—the Date is beginning a new role as the ideal unisex model.

The current range is forged all in steel, with some models receiving the lavishness of a white gold bezel. To obtain a piece with yellow gold in its make up, either solid 18k head to toe or else in Rolex’s own two-tone Rolesor, you’ll need to take a trip to the vintage market.

The ref. 150XX series started life in the early 1980’s, a replacement for the four-digit models which had been in production for more than 20-years. Well received though it was, it was something of a transitional reference. It introduced an important new caliber, but it was one which was swiftly improved on, so the family was superseded again in the late 1980’s.

That leaves the ref. 150XX as a comparative rarity as a preowned purchase, but with prices which are still highly reasonable.

Below we explore in a bit more detail arguably the most popular version in the range, one with the archetypal Rolex visual.

The bi-metal blend of gold and steel, what the brand dubs Rolesor, has been a feature in Rolex’s lineup since the 1940s. Once reserved solely for the dressier end of the catalog, it is widely used these days in the tool watch collection as well. 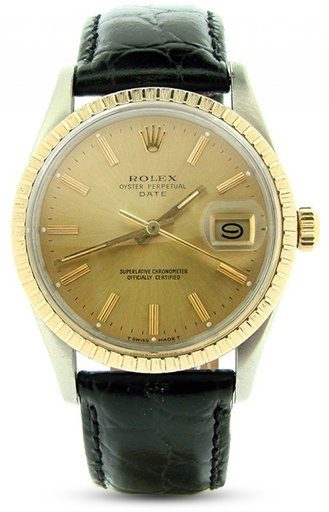 It is a versatile look which is really a perfect metaphor for Rolex itself; the steel representing the strength and reliability of their watches, the gold signifying their luxuriousness. What’s more, it is an immediately identifiable aesthetic, one that drops out of fashion on occasion but which is presently enjoying a resurgence.

The ref. 15053 has the mix of a steel 34mm case, topped by a yellow gold (either 14k or 18k) engine-turned bezel, with the precious metal also used for the winding crown and central links of the bracelet.

For those not familiar, the engine-turned surround has a series of decorative grooves etched into the surface, an alternative to the conventional fluted type, and one which seems to have since fallen out of favor. In fact, the Date model was the last watch range to have it as an option.

There were a handful of other variants in the ref. 150XX series as well.

The ref. 15003 was another Rolesor piece, but came with a polished surround. The ref. 15000 was the simplest, the all-steel model, again with a smooth bezel, whereas the ref. 15038 was the top of the line, in solid 18k yellow gold.

Then there were two further examples with no present-day equivalent.

The previous generation of the Rolex Date, the ref. 15XX, had been powered by two separate movements; the Cal. 1565 (up until 1965) and the Cal. 1575. The only real difference between them had been an increase in balance frequency, the former beating at 18,000vph, the latter upping it to 19,800vph.

With the five-digit ref. 150XX, the caliber was swapped once more, introducing an entirely new family of mechanisms, the Cal. 3000 series, with the Date receiving the Cal. 3035.

However, by this time in their development, Rolex’s engines had pretty much settled down on a basic architecture. They may have had a different reference number, but just like before, any changes were kept to a minimum. In fact there were only really a couple of major distinctions between the incoming movements and the ones they replaced, the first being, again, their speed.

The Cal. 3035 brought the now-standard 28,800vph rate, giving the eight ticks-per-second sweep to the seconds hand we associate with the brand. The higher frequency also aids with a greater timekeeping accuracy and  improved shock resistance.

And the second feature to make an entrance was the Quickset. This allowed for the date display to be advanced using just the winding crown, independently of the main hands. Now, pulling the crown out to its second position and turning it one-and-a-half times forwarded one numeral.

So the free sprung balance was carried over from the older movement, as was the Breguet overcoil on the hairspring and Rolex’s own Microstella regulating system. The hacking function, which had come in on the Cal. 1575 around 1972 was retained as well.

One other small change was the inclusion of a fast rotating barrel which increased the power reserve from 42 to 50-hours.

But a welcome rise in convenience and accuracy though it was, the Cal. 3035 was a fairly fleeting caliber. It was itself replaced a mere five years later in 1988 with the unveiling of the ref. 152XX series, which brought the updated Cal. 3135, a bona fide legend in the industry and a movement built so well you will still see it in use in the modern lineup, inside both the Date and the Submariner.

With the steel and yellow gold makeup of the Rolesor watches, such as the ref. 15053, Rolex tend to issue the majority with certain types of dial.

By far the most popular is the champagne, the tones of the face matching the golden elements of the rest of the watch perfectly.

Other well received choices include the relatively conservative black, white and silver, each color bringing its own character to the model. Less frequent is the blue dial and there are also some extremely rare limited editions if you look hard enough.

During this period in their history, Rolex were sometimes commissioned by various organizations, often military, to supply watches with brand logos on the dial. At the top end of the preowned price range you may find models with the insignia and emblems of a nation’s armed forces, mostly from Middle Eastern countries. These can be a fascinating option.

As for luminescence, Rolex watches of this period were still using tritium, a radioactive but completely safe substance that supplanted the much more hazardous radium of the 50s and 60s.

And over the top is an acrylic crystal, a lovely vintage touch and the last time it would be seen on the series, with the tougher and more scratchproof sapphire crystal taking over on the next iteration.

Rolex likes to give its watches the perfect finishing touch, marrying each one to the ideal bracelet based on its overall demeanor.

So the steel versions of the Date and Datejust were commonly fitted with the Oyster, the three flat-link band being the most sporty and utilitarian of the brand’s trio of metal options.

As soon as gold, and particularly yellow gold, enters into the equation, you will find the Jubilee is more often the bracelet of choice.

Originally designed especially for the Datejust in 1945, its five links not only make it extremely supple and comfortable, it also gives a definite formality to the watch. This is the band the predominance of ref. 15053 models will be sitting on.

In this era, Rolex was not yet using all solid links as they do now. Only the outer links will be solid, while the middles were still hollow. There is still plenty of heft to the bracelets, but they are  much lighter than their modern-day counterparts.

However, with the highly adaptable styling of the watch, it tends to work well whatever you choose to pair it with. Many of the preowned examples you will see have a leather strap, another option which completely changes the personality of the piece.

Because of its slightly reduced dimensions, the Date’s lug width is 19mm as opposed to the Datejust’s 20mm. And, another big favorite of many collectors, all the cases still have lug holes, allowing for a relatively easy time swapping and changing bracelets as the mood takes you.

The ref. 15053’s age puts it firmly in that neo-vintage bracket, a watch with just the right number of nostalgic touches but with enough modern engineering to make it a safe everyday wear.

The acrylic crystal, lug holes and most of all its unusual engine-turned bezel give it heaps of retro charm, while the Cal. 3035 is a workhorse that will keep it ticking for a lifetime.

At 34mm it is a great size for a male or female wrist as well, and at prices that are surprisingly realistic.

Take a look at a great selection of 100% guaranteed authentic models in our online store.