I don’t actually know why Rolex call their 34mm version of the Datejust simply The Date.

Now one of five different sizes in the family, it is the only model to drop the last half of the name, and it always has. 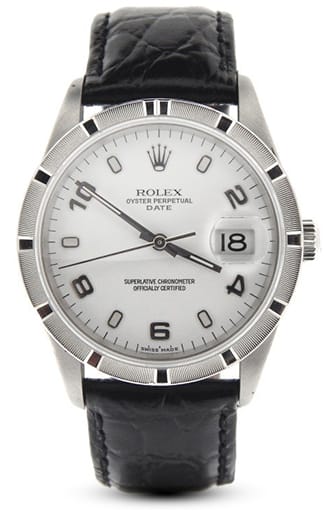 These days, it is just about the perfect unisex wear and present-day versions are becoming extremely popular.

The ref. 152XX ran from 1988 to the mid-2000s  and is the series before the current one, with the lugs still slim and sweeping as opposed to the modern, more muscular style.

Despite the difference in name, everything else about the range was the same as the rest of the Datejust range. It offered identical functionality and was issued in a choice of styles and colorways. The only major difference was in the types of bezels in which it was made available.

The ref. 15210 is an especially interesting and increasingly sought after example. Not only for its handy size but also for its detailing—it holds one element that is no longer part of the Rolex design book, giving it a pleasing retro nostalgia.

But that is just on the outside. Internally, the watch uses the same movement that powers the contemporary Date, one built so well it has served for more than 30-years without breaking a sweat.

In that way, the ref. 15210 is the ideal blend of the old and the new. A beautiful vintage-looking addition to the collection, but one robust and reliable enough to last several lifetimes.

Read on for a closer look.

The ref. 152XX collection of the Rolex Date would be the last one to contain any hint of yellow gold. The ref. 15223, for instance, was the Rolesor version, with the precious metal making up the bezel, winding crown and center bracelet links. The ref. 15238 was cast in all 18k yellow gold.

But the 34mm watch has long been the least showy out of any in the Date”just” series, with stainless steel the most widely used option.

That is the metal from which the ref. 15210 is forged. It gives the already somewhat conservative-looking model an even more understated aspect, perfect as the go-anywhere, do-anything everyday companion.

However, the bezel is a little different to anything you will see today in the Rolex catalog, for any model. The engine-turned style consists of grooves etched into the surround, much more finely, in this case anyway, than the traditional fluted type. Above each hour marker, the metal has been left smooth resulting in little tabs at the indexes, with a double width one at the 12 o’clock.

Although it had been a relatively common addition throughout the brand’s history, the ref. 15210 would be the last Rolex watch to feature an engine-turned surround, giving it some genuine old school charm.

It is also something of an attention grabber. Those ridges catch the light keenly, and at the right angle the polished elements look almost black. That contrast really catches the eye and adds just the right flamboyant touch.

Although only in production for about ten years, the earlier series was still a significant one, bringing the first high beat caliber to the watch, the Cal. 3035.

When the ref. 152XX took over, it was to introduce another new movement, the legendary Cal. 3135. More a subtle evolution of the previous mechanism than anything else, it retained the same 28,800vph frequency, and many of its other features, while subtly upgrading anything Rolex felt was still lacking.

So, components like the Nivarox hairspring with Breguet overcoil, the Microstella regulating system and, crucially, the Quickset function were all carried over. That last, which made its debut on the Cal. 3035, allowed for the date numerals to be set by winding the crown, rather than having to turn the main hands through 24-hours as before.

The only real adjustments were a larger balance wheel, utilizing a full balance bridge rather than a balance cock, the jewel count increasing from 27 to 31 and the power reserve being upped to 50 hours over the previous 42. In all other respects, the Cal. 3135 had the same basic architecture as the outgoing engine, and was simply a case of making an extremely good caliber even better.

The work certainly paid off, and the Cal. 3135 is recognized as perhaps the finest mass-produced movement of its kind ever built. It is also the most widely-used, and is still at work inside the modern Date watch, as well as the current Submariner.

Along with the more restricted metals selection, the other area the Date tends to lose out slightly when measured against the rest of the Datejust models is in dial options.

The ref. 15210 was only issued with a fairly small handful of different color faces. Its stainless steel makeup saw it pair particularly well with the silver dial, making the entire watch just one tone overall.

For a little more in the way of contrast, the white or black color schemes broke things up nicely, as did the sunburst blue, still one of the most popular examples today.

Additionally, this was the generation of the watch that started to be aimed more directly at a unisex audience, and so you will find pieces fitted with an attractive, and feminine, salmon pink dial.

As for hour markers, they were most commonly plain batons, used as they took up the least amount of room. Arabic numerals featured only sparingly, and you will only find the white dial versions with Roman numerals.

As the steel pieces are generally seen as the so-called entry level offerings in any of Rolex’s ranges, there are no official diamond-enhanced specimens of the ref. 15210. Nevertheless, you will still run across plenty of models with gemstones on the dials and bezels added by independent watchmakers. These aftermarket customizations render the watch non-authentic in the eyes of Rolex themselves, who will subsequently refuse to service it. That shouldn’t put you off though if you spot one you can’t live without. It is just a question of locating an external maintenance center to look after it.

With the ref. 152XX series in production for a reasonably long time, it actually went through three different types of luminescence during its tenure.

The early run models were still employing tritium, a replacement for the hazardous radium Rolex had been using for decades. Although tritium was still radioactive, it was at a far lower level than the previous substance, which had caused such severe harm and controversy in the past. These dials are easily identified by looking at the very bottom edge, where you will see either ‘T SWISS T’, ‘T Swiss Made T’ or ‘Swiss T<25’, written under the six o’clock index.

In 1998, the brand made the switch to Luminova, a photoluminescent material and completely free from radiation. Unlike the former types, Luminova is not self-illuminating, meaning it has to be ‘charged’ by spending time in natural light before it will glow. These dials are marked ‘SWISS’. Finally, after just a couple of years, Luminova was swapped once more, this time for SuperLuminova, basically the same substance but produced by a Swiss company. These dials, as they are today (even though the lume has changed yet again) have ‘SWISS MADE’ at the bottom.

Above the dials on all models, a sapphire crystal provides the protection, complete with its magnifying Cyclops lens. A substitute for the acrylic crystal of vintage models, it is an altogether stronger and more scratch resistant alternative

Because of its utilitarian, purely stainless steel construction, the ref. 15210 is most often fitted with the no-nonsense three-link Oyster bracelet.

Originally created to match with Rolex’s burgeoning tool watch range in the late 1940s, it has been used with practically every model from the brand at one point or another.

On the Date, it gives a relaxed finishing touch, and underlines the watch’s sporty nature.

The other possibility, and a much less frequent one, is the beautiful five-link Jubilee. The Jubilee band was made especially for the debut of the very first Datejust model in 1945. The smaller, more plentiful, links ensures a superb suppleness on the wrist as well as lending the watch a more dressy look.

Both bracelets from this period feature hollow center and solid outer links, still prone to stretching over time like the all hollow, folded and rivet styles they replaced.

As with the luminescence, the case changed a little over the course of the ref. 15210’s production as well. The earliest models still had lug holes, making swapping bracelets a little easier, and they were phased out through the years in the 90s.

And one final difference from larger Datejust pieces; the lug width on the ref. 15210 is 19mm as opposed to 20mm.

Able to do everything its larger siblings can do, the Date ref. 15210 could be an excellent entry point into Rolex ownership.

With all the modern touches where it counts, but with a couple of traditional elements to up the vintage cool quotient, its size suits the tastes of both men or women.

What’s more, the general styling is highly adaptable and can match just about any occasion, from formal to casual.

But perhaps best of all, as one of the more ‘forgotten Rolexes’, prices for the watch are extremely reasonable. You can pick up one of these versatile, flawlessly executed pieces for less than $4,500.

For a selection of some of the best around on the preowned market, head over to our online store.