The Datejust started life in 1945, and was the creation that really put Rolex on the watchmaking map. It encompassed the brand’s two paradigm-shifting innovations—the waterproof Oyster case perfected in the 1920s, and the self-winding Perpetual movement from the following decade—into one sleek, versatile whole.

By 1957 it was obvious the watch had a style adaptable enough to appeal across the genders, and the first Lady-Datejust emerged, sharing all the same engineering and design prowess of the original 36mm piece, but condensed into an ultra-feminine 26mm size. 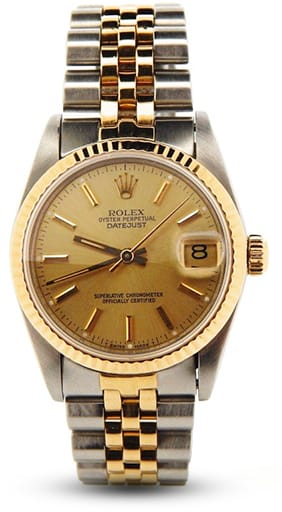 That too became massively successful, immediately topping Rolex’s best-seller list, a position it holds to this day.

So, with hugely popular models at either end of the spectrum, the 1960s saw the manufacture work to consolidate their position as all-things-to-all-people with the launch of a 31mm watch, a smaller ‘mid-size’ to sit next to the 34mm Date released in 1950.

Ticketed as a unisex piece, it was still favored by more women than men, the perfect choice for those who wanted just a touch more wrist presence than the truly tiny Lady-Datejust.

Other than the dimensions however, all was business as usual with this new addition. The same attention to detail was poured into every aspect of its build as with others in the range, and the breadth and depth of selection in metal, dial, bezel and bracelet were on a par as well.

The ref. 68273 had the most archetypal look of all, with its mix of metals and trademark detailing. And, as is so often the case with Datejust watches, the most pleasant of the surprises is reserved for the price tag.

Below we take a closer look at this elegant and sophisticated timepiece.

The idea of joining yellow gold and stainless steel elements onto one watch is something Rolex came up with in 1933, although they didn’t start using it until 15-years later. The first to receive the combination, dubbed Rolesor by the brand, was the Datejust itself, the perennial test bed for most of the company’s groundbreaking inventions.

A two-tone Datejust, with the precious metal forming the bezel, winding crown and central bracelet links, is now the most ‘Rolex’ visual there is, a signature design that has endured through the ages.

It has been used across the entire range of models, smallest to largest, and the 31mm ref. 68273 was another to receive the treatment.

Topping it off is what is referred to as a fluted bezel, the surround finished with a gently undulating, tooth-like design. It, like the bimetal construction, is a Rolex icon, a tastefully accomplished hint of bling—just enough to catch the eye without overwhelming.

As you would expect though, that wasn’t the only choice available. The Datejust’s major calling card has long been its utterly bewildering number of different connotations.

Others in this first of the five-digit series included the ref. 68243, also in yellow Rolesor, but this time with a more understated smooth, polished bezel. In addition, there were stainless steel versions, including the ref. 68240 (smooth bezel) and the ref. 68274, again with a steel case but with a white gold fluted surround, giving a little flamboyance to the otherwise all-over monochrome look.

Others, known as the Crown Collection, featured highly bejeweled examples, the surfaces awash with gems of all description. Usually made to order, they had a degree of exclusivity that makes them extremely valuable and sought after today.

Although it was marketed as a unisex watch, the mid-size 31mm Datejust was powered by the same movement that drove the equivalent Lady-Datejust of the period.

In the case of the ref. 68273, that movement was the Cal. 2135. Only the second generation of Rolex’s Cal. 2000 series, it took over from the relatively short lived Cal. 2035 which was found inside the previous four-digit models.

By this time in the brand’s development, they had hit on a pretty much faultless formula for their calibers. Unlike several of the haute horlogerie maisons from Switzerland, Rolex’s emphasis has long been on performance over finishing. The mechanisms they create sacrifice the glorious decoration you would find on a Patek Philippe or a Girard Perregaux, and concentrate instead on the practical—movements that function perfectly, with amazing precision and longevity, in any and all conditions.

But even among the litany of superb engines in Rolex’s catalog, the Cal. 2135 is very special. It, and its no-date companion, the Cal. 2130, still hold the record for highest first time pass rate for accuracy of any movement tested by the COSC.

Measuring a minute 20mm x 5.83mm, the Cal. 2135 still managed to pack in elements which had made the rest of the manufacture’s creations so formidable, such as the antimagnetic and temperature-resistant Glucydur balance wheel, an alloy of copper and beryllium. The Nivarox hairspring was fitted with a Breguet overcoil and Kif shock absorbers soaked up the impacts.

But it did introduce one extremely useful upgrade over earlier models, in the shape of a Quickset function. Now, rather than having to wind the main hands through 24-hours to advance the date, it could be achieved simply by pulling the crown out to its second position and forwarding it independently.

It was a welcome and pioneering innovation, since used widely on most watches across the industry.

Beyond that though, the Cal. 2135 shared most of its features with the outgoing Cal. 2035, including the same balance speed of 28,800vph. Marking it as a so-called high beat movement, it produces the characteristic eights-ticks-per-second frequency to the sweep hand of all modern Rolex.

With its Rolesor coloring, the ref. 68273 was among the most popular of the mid-size Datejust models, and as such was issued with a wide variety of dials.

The classic look to complement the two-tone metals is the champagne dial, the face matching the golden elements of case and bracelet precisely.

Other well-accepted options include black, white and silver, each one bringing a specific personality to the watch.

Away from those standards, there is an almost uncountable number of different choices on offer.

Just about any color you could want is represented, alongside those with unusual features such as the tapestry dials, or those crafted from exotic materials to add absolute exclusivity, like mother of pearl or lapis lazuli.

Floral dials were brought in with this generation, a nice feminine touch, and also the Jubilee dial. Released in 1985 to celebrate the 40th anniversary of the Datejust model as a whole, the Jubilee dial features a repeated ‘ROLEX’ monogram across the entire face, a big hit in the logo-obsessed 80s that is still part of the collection today.

As for hour markers, the usual choice of Roman or Arabic numerals, as well as plain stick batons are plentiful. The top of the line pieces also had the option of diamond indexes for the ultimate luxury.

And one other debut with this iteration; the former acrylic crystal, a highly admired detail with vintage fans, was replaced by the far tougher and more resistant sapphire to give extra protection to the dial.

Again, because of its gold and steel elements, the ref. 68273 has a distinctly formal aspect and, as such, is most often seen on the five-link Jubilee bracelet. Rolex’s most intricate band, it is dressier than the other common type, the three-link Oyster. It gives buyers the choice to display their individuality, depending on what they want to say with the watch.

Additional bracelet styles were fitted to other references in the series, with the President, a three-semi circular link band, given over to the all-gold models. And another creation, a peculiarly 80s one, was the Tridor. A standard President bracelet, with a stripe of all three colors of gold running down the central links. No longer an option in the current range, it is an attractive and much missed option.

The ref. 68273 is one of the most versatile and popular versions of Rolex’s biggest selling watch of all time.

The bi-color metals ensure a great deal of versatility, allowing the piece to be worn up or down, and suiting every occasion.

What’s more, its larger size leaves it as a more modern choice than the Lady-Datejust, with the trend for bigger watches still in evidence.

Head over to our online store for some of the best selection available.