Even though the bigger-is-better spirit in watchmaking is perhaps showing its first tentative signs of slowing down, there is still nothing in the current Rolex family weighing in at the truly diminutive 24mm. The smallest in the range is a full two millimeters larger; also a tiny model but nevertheless a noticeable difference.

It is only fairly recently that the last 24mm watch was retired from the lineup. In 2015, both the smallest and largest of the Oyster Perpetual series took a bump up in dimensions; to 39mm at the top and to 26mm at the bottom. That means, for one of these miniscule marvels, you will have to explore the pre-owned market.

Once there, you will find a number of vintage ladies watches in the size. Alongside the OP, there are a small handful of the brand’s ultra-dressy Cellini range—exquisite pieces of jewelry that also happen to tell the time.

Below we’ll take a look at just what Rolex can do with such a limited amount of space.

The Oyster Perpetual has always been the simplest and most accessible series in Rolex’s history. The watch that really started it all for the brand, it has enjoyed the longest unbroken production run of any and has been released in a wide variety of sizes aimed at both men and women. Only withdrawn from the range in the last few years, there has been a 24mm version for generations. 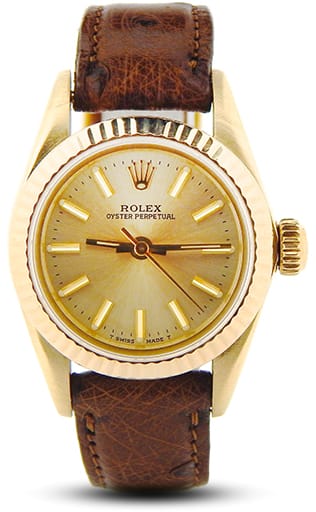 As a collection, it can put its incredible longevity down to its versatility. The three-hand, no-date watches have such an all-embracing, minimalist design they can complement just about any outfit, whether paired with jeans and a t-shirt or adding a finishing touch to a tuxedo or little black dress.

For many, an Oyster Perpetual marks the start of their relationship with Rolex and for others, it also marks the end. OPs are often bought by those who simply want the one ‘good’ watch that will last them a lifetime and be passed along to children and grandchildren.

Of course, they can act as a gateway into the world of collecting too. The extremely petite women’s sizes especially represent the best value for money pieces Rolex produce. Made over the years in various flavors of gold as well as all steel and Rolesor versions, the quality of manufacture has always been typical of the brand, i.e. flawless, but the sheer physical size and lack of any hint of a complication has consistently kept the cost a pleasant surprise to many.

But perhaps the most impressive elements of these minute watches are the parts you can’t see. The internal movements retain all the same features as those in the larger models, engines that redefined the industry standards for reliability and accuracy, but Rolex’s engineers have managed to condense the calibers in the 24mm Oyster Perpetual series to such a small size that they are somehow even more impressive.

In short, if you are looking for the ultimate in elegant, and affordable, understatement, this watch should be your first port of call.

Dreamt up by Rene-Paul Jeanneret, the man mostly responsible for the Submariner, and named after 16thcentury Italian sculptor and goldsmith Benvenuto Cellini, Rolex’s line of distinguished dress watches emerged as the antithesis of the brand’s world renowned professional range.

It is a series still in production today, although many fans are unaware of their existence, and the modern catalog consists entirely of men’s watches.

But throughout their history, there have been a host of exceptionally delicate and sophisticated models for women in an array of sizes, with several 24mm and even smaller.

The Cellini watches remain unique in the canon in that they are not Oyster Perpetuals, meaning they are neither waterproof nor do they contain one of Rolex’s mechanical self-winding movements. In fact, some are even quartz powered, the only examples outside of the Oysterquartz Day-Date and Datejust of the 1970s.

They are watches intended entirely for show rather than as the sort of tool on which the company built its reputation.

The variety of styles throughout the collection is immense, but the earlier pieces are clearly heavily influenced by the Art Deco movement of the 1920s. In general the range is crafted from precious metal, including platinum, but there are the very occasional stainless steel models as well.

Of the standout pieces in the Cellini family, the Danaos comes in a variety of finishes and sizes, with the ref. 6229 clocking in at 24mm (well actually 24.5mm, but who’s counting?) With its large Arabic numerals it has perhaps one of the more legible dials despite its size, and the classic cushion-shaped case gives it a wonderfully vintage feel.

Because Rolex’s professional range have managed to pull off the trick of being perfectly at home dressed either up or down, the Cellini watches, which are very much only for special occasions, are more often than not overlooked. That lack of adaptability has kept the prices for these beautiful pieces far lower than you might expect.

In addition, in a sea of Lady-Datejusts and Oyster Perpetuals, it is unlikely you will bump into anyone sporting the same Cellini.