Launched in 1956, the Day-Date arrived 11 years after its closest cousin, the Datejust. An immediate success and elegant statement of intent from Rolex, it was the first self-winding, waterproof wristwatch ever made to display both the date and the day of the week spelled out in full. Its twin complications, and its solely precious metal construction, saw it seize flagship duties in the brand’s growing portfolio.

However, like many original Rolex releases, particularly those hailing from the golden age of the 1950s, it had a relatively turbulent start in life.

Within only a few short years it was into its third iteration, with the two previous versions, the ref. 651X and the ref. 661X, introduced and quickly retired as improvements (mainly internal) moved along at a brisk pace.

Mirroring the Datejust, as the Day-Date has always tended to do throughout their respective production runs, the series presented in 1959 was the one that stuck and became the longest serving in the watch’s history.

The ref. 1803 is to the Day-Date what the ref. 1601 is to the Datejust—the model where all the most important engineering and aesthetic details were squared away and the one which would go on to secure the piece’s unassailable reputation.

It would not be superseded by its five-digit replacement until the late 1970’s, nearly 20 years later. During those two decades, it became the epitome of aspirational luxury. The watch that graced the wrists of more of the world’s power players than any other, nothing said ‘I’ve made it’quite like a Day-Date.

Personalities as contrasting as Lyndon Johnson, Martin Luther King Jr., Warren Buffet and the Dalai Lama all sported the watch that would go on to become better known, for obvious reasons, as The President. And to cater to such a diverse group, the ref. 1803, like the Datejust, kept adding more and more visual options, ensuring there was at least one version to appeal to just about everyone.

Below, we take a more in-depth look at this legendary reference.

Aside from that extremely useful day of the week display, the biggest difference between the President and the Datejust has always lain in their materials. 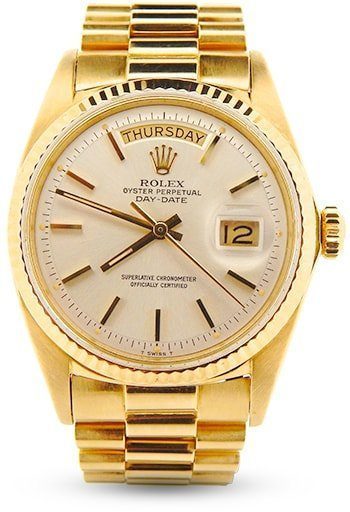 The Datejust has long had a stainless steel option among all the golden finery, lending it something of an everyman persona. The Day-Date never has, giving it a more ‘I’m in charge of every man’character.

The ref. 1803 was only ever a 36mm model, released in yellow, white and rose gold, always 18k as opposed to the 14k option on a number of Rolex’s other offerings. It was also, very sparingly, released in the finest of the precious metals, platinum.

As with all of the brand’s reference numbers of the period, the last digit tells us the type of bezel used. The 1803 had the fluted surround, released at the same time as the ref. 1804 (diamond bezel) and the unusual ref. 1806, which had a textured linen pattern on both the bezel and the lugs, dubbed the Morellis finish. Debuting a little while later in 1963, the smooth bezeled ref. 1802 had a more understated presence, unlike the ref. 1807 from the same year with its tree bark-like surface.

Pretty much the only reason Rolex updates its core roster of models is because they have developed a new and better caliber to drive them.

Founded on the architecture of the base movement, the Cal. 1530, it was a mechanism used exclusively by the Day-Date; part of the 1500 range, the first movements Rolex ever made in-house.

Although it was the thickest engine of the series, thanks to the extra workings required by its second complication, it was still significantly slimmer than the caliber it replaced, allowing the watch’s case to return to a more graceful silhouette.

Originally beating at 18,000vph, or 5 Hz, it didn’t have quite the smooth sweep of later calibers but did benefit from a free sprung Nivarox hairspring with Breguet overcoil and a Microstella regulated balance wheel.

It powered the 1803 with distinction until 1967 when it was replaced with the Cal. 1556—virtually identical but with an upped frequency of 19,800vph. As well as improving the timekeeping accuracy a fraction, the higher beat added a certain amount of inherent shock protection.

A hacking function was added in 1972 across the whole of the 1500 family, including the 1556. Now, pulling out the crown stopped the seconds hand, allowing for the time to be set more precisely.

Just as it did over with the 1601 Datejust, the ref. 180X range of Day- Dates is where the series first garnered an enormous number of dial options.

It may have been originally designed to represent the height of exclusivity, but Rolex clearly wanted their top-of-the-tree model on the wrist of as many ambassadors as possible, and an exhaustive selection of faces was one very effective way of making it happen. 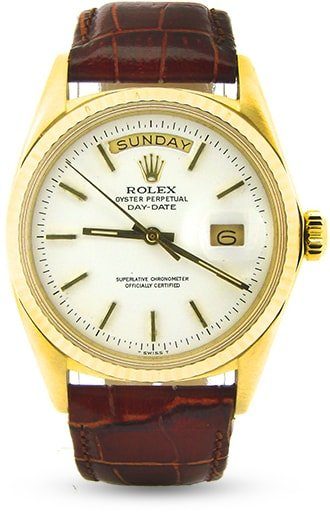 As befit the statesmanlike bearing of the model, the initial selection was more refined and sober than those of the DJ. Classic shades of black, white and silver were plentiful, but none more so than the champagne dial. An all-gold dial on a solid yellow gold watch was to become the ultimate status symbol along the corridors of power.

It wasn’t all staid respectability though. In the heady 1970s, the so-called Stella dials emerged, intensely colorful lacquered enamel faces in fluorescent oranges, pinks, turquoises and greens. Adding something so lurid to such a pillar of the establishment was akin to seeing the Queen of England wearing a spinning bowtie and big red nose, and they were produced only for a fairly brief time, mainly for the Middle East market.

As for the handset and hour markers, very early versions of the 1803 were fitted with unusual Alpha hands; wide at the base and narrowing to a sharp tip. They also had faceted indexes, with the ones at the six and nine o’clock being double width. Soon into the 1800 series’ run however, Rolex switched to the simple stick batons we all know today.

Produced in smaller quantities were dials with Arabic or Roman numerals, and there were, as there are now, models with diamond-accented markers for the ultimate in luxury.

All of the dials on the 1803 Day-Dates, just as they were on the Datejust of the era, were pie pan style. Featuring a sunken outer edge that gave the impression of an upside down plate, they were phased out by the end of the reference’s run and replaced with the contemporary flat dials.

Luminescence was only found on certain types, used economically mostly on the hands. The 1800 series would have been the first to use tritium, following on from the controversial radium of earlier years.

On top of it all was an acrylic crystal, as opposed to the more scratch resistant sapphire which would come later with the five digit models.

And finally, the languages. On the 1803, you could take your choice of 11 dialects as opposed to today’s 26. Amongst the rarest are the pieces with full Arabic text which, like the Stella dials, were aimed at a Middle Eastern audience. These were mostly confined to the platinum models, with the Islamic religion prohibiting men from wearing gold.

Interestingly, the ref. 1803 was the first reference to wear the bracelet we most associate with the watch, the President. 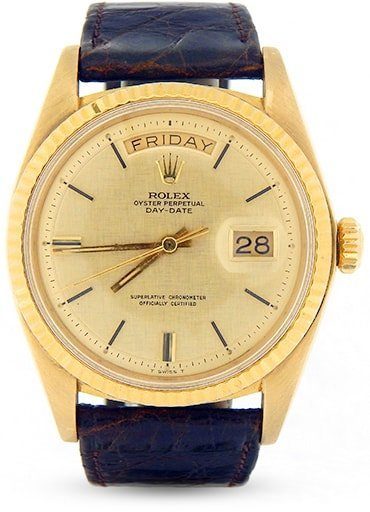 Created specifically for the Day-Date, the striking band is a mixture of elements taken from Rolex’s two other metal bracelets—employing the three links of the Oyster, but rather than having them flat, they are semi-circular like the Jubilee.

A well-loved design, the President manages to be both sophisticated and masculine at the same time as well as, crucially, wearing extremely comfortably.

The 1803 was produced in the age of hollow center links, rather than the solid ones of today and as such, were considerably lighter than modern versions. It also left them more prone to bracelet stretch, which is one reason preowned examples are often found on a replacement band, especially at the lowest priced end of the spectrum. Fortunately, the Day-Date is another of those watches that looks superb on a leather strap.

One thing the 1803 is missing compared to the Datejust 1601 is drilled lug holes, making swapping bracelets that bit more involved.

Yet despite its significance, prices for a well set up example are far from unrealistic. For less than $7,000, you can own the watch worn by some of the most successful people in the world; from captains of industry and boardroom czars through to bona fide presidents.

A crucial part of the Rolex legacy, there is still nothing quite as impressive as the Day-Date.