Top 10 Rolex Watches of All Time -

Top 10 Rolex Watches of All Time

Rolex has been making watches for well over a century now, and have worked to make themselves the most efficient and self-reliant manufacturer in the industry.

As a result, they have brought in-house every one of the many separate disciplines that go into building their components, until they have become the poster child for complete vertical integration.

This streamlining of the whole process allows the modern company to produce a rumored one million watches every year, while still keeping the flawless quality on which the brand first built its name.

But of all those countless pieces created over the years, which are at the very top in terms of desirability, availability and sheer volume of sales?

Below, we have put together a list of the top 10 Rolex watches of all time.

The initial Datejust reference, the ref. 4467, arrived in 1945 to commemorate the 40thanniversary year of Rolex itself, and changed the entire landscape of the wristwatch as it did so.

Waterproof, self-winding and displaying a date function (the first watch in the world to do all three), it immediately became the flagship offering from the still relatively young company.

By the time the ref. 1601 arrived in the late 50s however, that honor had been usurped by the Day-Date. Yet, it was the reference that enjoyed the longest production run in the Datejust’s history, finally being granted retirement more than 20 years later.

It was also the one to really nail down the look of the DJ, and start the tradition of being offered in innumerable different metal, dial color and bezel combinations.

Today, with such a vast number being made and sold over its two decade tenure, the ref. 1601 is certainly among the most affordable of the vintage Rolex watches. Excellent examples of this vital chapter in the brand’s story can be had for less than $3,000.

Another extremely long-running reference of an all-time classic, the GMT-Master ref. 1675 was unveiled in 1959 and just kept going until 1980.

It was the first of the series to be granted crown guards, giving a more modern profile and, while initially only available with the iconic red and blue Pepsi bezel, during the 60s and 70s Rolex also released an all black surround, as well as the brown and gold coloring known as Root Beer.

It was the reference that cemented the GMT-Master’s place in horology pop culture (Magnum P.I. wore one, for crying out loud!) and, like the ref. 1601 above, the incredible number of them available keeps prices reasonable. Entry point for a ref. 1675 hovers around the $10,000 mark.

The second generation of the world’s favorite chronograph, commonly referred to as the Zenith Daytonas (named after ébauche manufacturer Zenith, who provided the watch’s first ever automatic movement) lies at the turning point in the model’s life.

Before the Zenith El Primero was fitted, nobody wanted a Daytona. After it was transformed into a self-winding piece, it became increasingly impossible to buy one. Demand for the watch sky-rocketed from the ref. 16520’s debut in 1988 and hasn’t come down since.

Although they were only made for a relatively short time, replaced by the third generation in 2000 with their fully in-house calibers, the Zenith’s sold in enormous quantities. Supply was hampered by having to rely on an outside concern to build the engines, leading to the start of the gargantuan waiting lists which have plagued the model ever since.

Still highly desirable today, prices start at around $20,000 on the preowned market.

The Datejust and the Day-Date tend to get upgraded at or around the same time, the two being very similar in style bar the President’s second calendar complication. 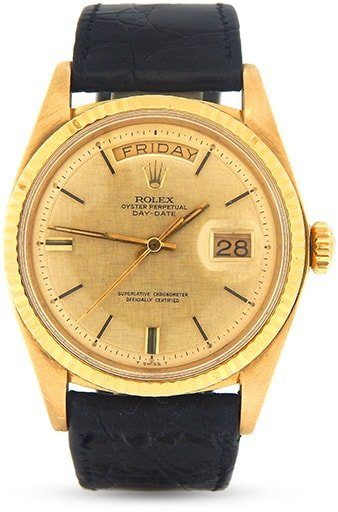 Such is the case with the Day-Date ref. 1803, which was brought out the same year as the ref. 1601 from above; 1958. Only the third reference of the watch since it was introduced a couple of years previously, it too ended up being the longest serving in the model’s term.

And also like the DJ, it was the 1803 that really finalized the look and set the Day-Date along the road to its current position as the last word in aspirational watches for the successful and ambitious. That styling has continued almost unchanged to this day—the most obvious difference between the modern day iteration and the 1803 is the vintage watch’s use of a pie pan dial, featuring a face with a downturned outer edge, like an inverted dish.

Over its 20-year run, the 1803 was only available in precious metals, another tradition that still holds true. Yet, as a preowned buy, they remain extremely reasonable. A solid 18k gold piece, on its eponymous President bracelet, can be had for as little as $8,000 to $10,000.

The Rolex Submariner had a particularly turbulent early life, going through 10 different references in its first decade of production.

By 1958, it had all settled down a bit with the release of the ref. 5512. It gave us the familiar silhouette of the Sub, with a newly increased 40mm case, complete with crown guards. Three years later in 1962, the ref. 5513 arrived; ostensibly the same watch but, unlike the 5512, it ran on a non-chronometer movement.

As such it was priced significantly lower, and with nothing to choose between them visually, the 5513 enjoyed greatly improved sales as a result. In fact, it was so popular that it was still being made in 1990, nearly 30 years later.

Today, it is one of the most beloved versions of possibly the most universally adored watch ever made, with enough tiny variations to its dial makeup during its run to make collectors drool.

It’s not the most famous reference of the Sub’s bigger brother, as evidenced by it being the first Sea-Dweller without a nickname. But the watch that followed on from the ‘Double Red’, the ‘Great White’ and the ‘Triple Six’ experienced a two decade run, resulting in massive sales.

In truth, on the outside there wasn’t much to distinguish the model from the previous reference, the ref. 16660 (the aforesaid Triple Six) and the changes were all internal. The earlier Cal. 3035 was replaced with the Cal. 3135, bringing a longer power reserve and a balance bridge rather than a balance cock.

Beyond that, the water resistance stayed at the same staggering level of 4,000ft, and the date window remained un-Cycloped—a big plus in its favor amongst the purists who decried the magnifying lens muddying up the Submariner’s symmetry.

On the current preowned market, the prevalence of the ref. 16600 has kept prices down, with immaculate examples starting at around $7,000.

If we are going to talk about enduring Rolex watches, we have to talk about the Explorer ref. 1016. Considered in some quarters as the most starkly beautiful model the brand has ever produced, it debuted in 1963 and was pretty much left well alone until it was replaced more than a quarter of a century later in 1989.

As simple as it is possible for a watch to be; a three-hand, no-date piece in a 36mm case, its understated nature worked against it in its day, going into battle against scene stealers like the Sub, GMT-Master and Daytona. But it has since become a huge fan favourite for exactly the same reason.

An out-and-out tool watch, it was studiedly unpretentious and remained so throughout its run, while all around it its contemporaries started appearing in precious metals and sprinkled in diamonds.

Currently you can buy one for about $12,000. And if you are on the fence about it, you should know that the Explorer ref. 1016 was the only watch worn by James Bond creator Ian Fleming.

While we have already featured the top vintage example of the Submariner, it was the ref. 16610 which brought the granddaddy of all dive watches into the modern era.

Although still a hardy and very capable model, it was the one that started to introduce just a little of the status symbol qualities we now associate with the Sub. White gold made its first appearance on the hour markers here, for instance.

And it was also the series in play when the 50thanniversary of the model rolled around, leading to one of the most distinctive variants in its long history. The ref. 16610LV (with LV standing for Lunette Verte) was a standard-issue piece, but with a bezel of bright emerald green.

It was the first time the color had been used on the Sub, although it had long been Rolex’s trademark shade. It caught many of the faithful off-guard to begin with, earning itself the moniker The Kermit, but would quickly become a highly sought after creation.

Only sticking around for seven years or so before it was replaced by the ref. 116610LV, which added a green dial as well (becoming known as the Hulk in the process), they now sell for a considerable premium over and above black versions of the same reference.

If the Zenith era revitalized the fortunes of the Daytona from also-ran to hottest ticket on the watch collecting scene, the third generation six-digit pieces were at an altogether different level.

Released in 2000, they benefitted from five years of exhaustive research and development behind the fortress doors of Rolex HQ, bringing us the revolutionary Cal. 4130, the Daytona’s first in-house self-winding movement.

In addition, they were also the first to receive Cerachrom bezels, the brand’s own ceramic alloy touted as fade proof, unbreakable, and completely scratch resistant.

But, even though they no longer have to rely on outside contractors to supply the engines, Rolex has still kept supply of their newest chronograph, in particular the steel models, incredibly low. It has led to extraordinary demand and even more astonishing waits for those desperate to wear the watch du jour.

If you can stomach the premium, expect to pay roughly twice the MSRP for a preowned example.

Although housing much more functionality, the Explorer II has traditionally been just as overlooked as its namesake, the original Explorer.

The third of just four references throughout the watch’s lifetime, the ref. 16570 arrived in 1989, originally as only a black dial option. 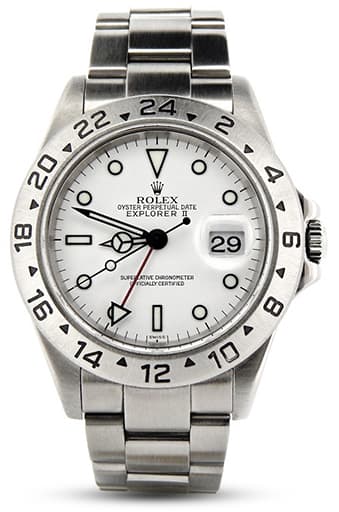 And, like its predecessor, while it was always fighting a losing battle against the established Rolex legends, it was the ref. 16570 that brought at least a little attention to the Explorer II.

The introduction of the watch’s first white, or Polar, dial shortly into its run helped immensely, creating two very distinct looks. It was also, and still is actually, fairly rare to see a Rolex sports model with a white face.

It is now the last of the 40mm versions, its successor growing to 42mm for a more contemporary aesthetic.

Just about as tough as they come, the Explorer II ref. 16570 is still a relative preowned bargain. Prices start at around $5,000.