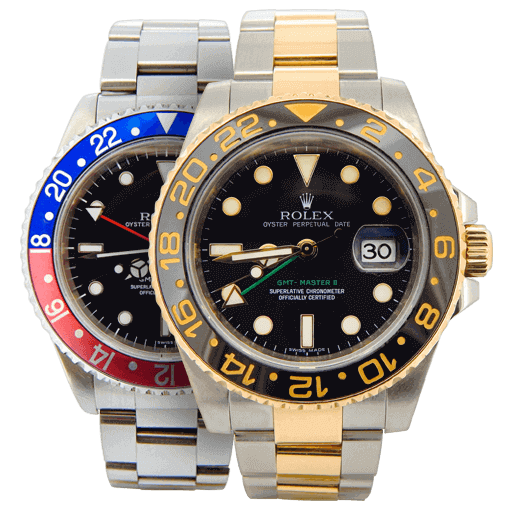 BeckerTime is proud to offer a great selection of Rolex GMT-Master mens two tone pre-loved timepieces sized 40mm. Currently, we feature a handsome pre-loved 18K yellow gold and stainless steel GMT-Master Date with Jubilee bracelet and popular brown and tan “Root Beer” bezel.  The black “Tahitian” MOP dial is complete with brilliant diamonds and dark green emeralds. Now, you can experience the luxury of owning a Rolex watch, but at a pre owned Rolex price. In addition, each purchase receives a 30-day money-back guarantee, as well as a Lifetime TradeUp Guarantee for qualified items.  Also, we provide personalized customer service. So, please don’t hesitate to contact us if we can help you find that perfect fit or special gift.

The Great Things About The Traditional Rolex GMT (16710) 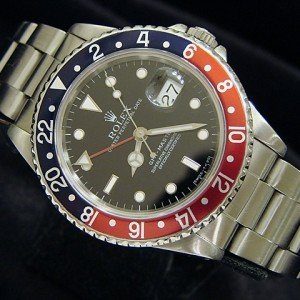 The Rolex 16710 GMT-Master II has a long history. It’s one of the very definitions of a tool watch and a very sought after watch. Originally introduced at the 1953 Basel watch fair, the Rolex GMT was designed for international travel crossing time zones. It also allowed pilots to read 24 hour time to note in their flight log books. Prior to the Rolex 116710 GMT that has a ceramic bezel, the older Rolex GMT bezel 16710 came in three bezel colors. They are all black, red-blue (known as a Pepsi bezel) and red-black (affectionately known as a Coke bezel).

The GMT With The Rolex 3186 Movement

In this day and age of the larger Rolex Submariners, DeepSeas, and GMT, the more classic GMT is very appealing. This is because the watch is lighter. Additionally, it possesses the same sapphire crystal and cyclops, and the same COSC certified chronometer mechanical timing precision found on the rest of the Rolex line. For a lucky one who has a Rolex serial numbered watch with a Z prefix, most likely this is one of the rate GMT with the 3186 movement inside it. This is the same updated movement found in the modern Rolex 116710 GMT complete with Parachrom hairspring and updated winding and time setting gear train. 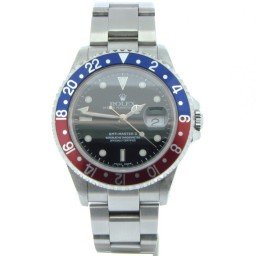 There are many appealing aspects to the Rolex 16710 GMT-Master II. This model uses a similar case as its brother the Submariner of the same era. Both the 16610 Submariner and the 16710 GMT utilize the same stainless 904L case. And the bracelet utilizes the more prevalent 314L stainless steel. Rolex progressed to using the 904L case starting in the 2000’s. It helps prevent corrosion that sometimes occurs on the caseback threads from sweat and seawater. Unlike the Submariner though, the GMT utilizes a thinner caseback and Twinloc crown found on the dressier Rolex DateJusts. The Twinloc crown and thinner caseback give the GMT a 100 meter water resistance rating. This is plenty durable for recreational swimming, snorkeling, and water activities that pilots would normally do.

The other appealing feature of the Rolex GMT-Master II is the ability to track three time zones. Using a combination of the 24 hour hand set to UTC or Greenwich time, and the rotating bezel, it is easy to track another time zone. The independently adjustable 12-hour hand makes it easy to change local time when traveling among time zones. The numbers on the bezel insert, combined with the SuperLuminova covered dial dots and Mercedes hands make the Rolex GMT one of the more readable watch faces.

Other than the GMT functions and the choice of black, red blue, and red black bezel inserts is the ability to change them. Unlike any other Rolex, as well as any other Swiss sport or dress watch, the owner can change the bezel insert. There are plenty of watch forums whereby one can source a bezel insert and Rolex dealers can still obtain them but only by trading the original bezel insert. Nevertheless, the Rolex 16710 gives the owner the ability to change the watch’s look quite easily. Great resources are at the Rolex Forum.

No one can go wrong with a GMT-Master II history, provenance, and ease in wearing it. We welcome you to view Beckertime’s great selection of Rolex GMT-Master II mens timepieces.

Two is Better Than One: The Two Tone GMT-Master

Similar to many Rolex collections, the GMT-Master line is a varied one with several metal choices. One option is the elegant combination of stainless steel and yellow gold — dubbed as Rolesor by the Swiss watchmaker. Join us as we delve into the four-part story of the two tone GMT-Master.

The very first two tone GMT-Master was the ref. 1675/3, which made its debut in the 1970s and featured both 14k yellow gold as well as stainless steel.

In terms of variety, the GMT-Master ref. 1675/3 had two different bezel options. There’s the black version, in addition to the bicolor bronze and brown version. The latter of the two is also known as the “Root Beer” bezel—following suit from the “Pepsi” and “Coke” soda nicknames.

Along with bezel selection, the GMT-Master ref. 1675/3 also offers a choice between the sporty Oyster bracelet or the dressier Jubilee bracelet. Of course, this being a Rolesor GMT-Master, the center links of each bracelet are fashioned in yellow gold.

A distinct trait of the vintage two tone GMT-Master ref. 1675/3 is its “nipple” dial named so for its gold faceted round hour markers. The black bezel model comes with a black dial, while the bicolor “Root Beer” bezel pairs with a rich brown dial.

In the 1980s, Rolex introduced the mens Rolex GMT-Master ref. 16753. This time, the gold portion of the two metals was 18k rather than 14k. Also, the then-new movement, the Caliber 3075, included the quickset date function. This means you can now set the date independently from the hour hand, therefore, making it much easier to keep the correct date!

Aesthetically, Rolex carried on a similar look with the black bezel and black dial pairing and the bicolor brown bezel and brown dial combo. However, there are also the lavish Serti dials with rubies and diamonds for indexes. 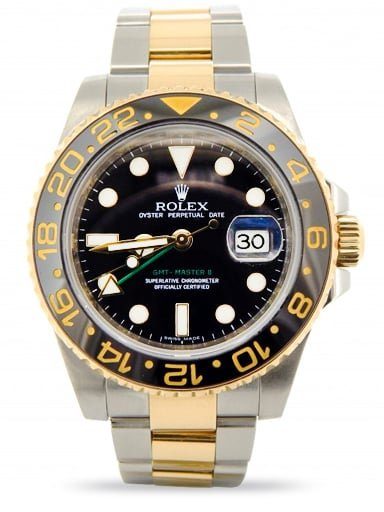 Among its long list of enhancements, the GMT-Master II ref. 116713 includes the Cerachrom ceramic bezel, bulkier case, improved bracelet clasp, and Triplock winding crown. There are also improvements to the Caliber 3186, including the Parachrom hairspring for better resistance and thus, reliability.

The above four versions of the two tone Rolex pilot’s watch clearly shows the evolution of the GMT-Master watch that balances both the ruggedness of steel and luxuriousness of yellow gold. Sometimes, two (tones) is indeed better than one!