With one of the most complex histories of any Rolex model, the Rolex Air-King has been with us for 70 years. Dubbed the Warrior Watch, the Air-King is known for its robustness and simple aesthetic. Unfussy, utilitarian and practical. The last of the original ‘Air-Series’ in honour of Britain’s Air Servicemen. 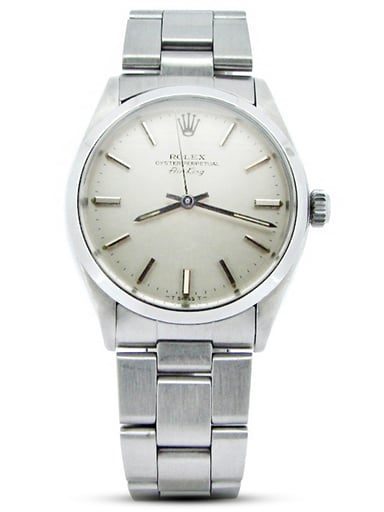 Being a popular Rolex watch and being produced for 37 years, it means there were plenty of dial variants that were produced for the 37 year production of the 5500. The rarest being the ‘Double Red’ where the words ‘Air-King’ and ‘Super Precision’ were all in red.

The Rolex Air-King was so popular there were different model lines for specific international markets that were introduced in 1958. Specifically the Air-King Date and the 550X models for the Commonwealth. Strangely there was a crossover with cases between Air-King and Explorer, just to muddy the waters even more. So in 1958 the 5504 Explorer 35mm case was also used for the Air-King, this being the only ever 35mm Air-King.

After all that time of the Rolex Air-King 5500, the model was updated and upgraded inside and out. With the new reference 14000 it sported a sapphire crystal and a new calibre 3000 movement under the hood. It was with this reference that the engine turned bezel was first introduced. The reference was changed to 14010 to reflect this modification.

In the year 2000, the 14000 series received the calibre 3130 and this change was also changed in the reference with the letter M signifying Modified.

After a relatively short stint the 14000 series was succeeded by the 1142XX in 2007. This change in reference also meant a full face lift for the Air-King. New dials were added, the case was now thicker at the lugs. Most significantly the new machined Oyster bracelet replaced the 78350. It was also during this overhaul the white gold fluted bezel became an option in the line for the first time. Most significantly is the receipt of COSC certification to put it firmly in the modern Rolex catalogue.

End of the Air-King Era

The 2014 Oyster Perpetual possesses the same durable Oyster case, but now has a Parachrom hairspring with Breguet overcoil, 904L stainless bracelet and case, Chromalight lume, a variety of watch faces, and available in 26mm, 31mm, 34mm, 36mm sizes. Suitable for both men and women with countless combinations to suit every taste.