History of The Oyster Perpetual -

The Rolex Oyster Perpetual in its modern guise is near enough every single watch in the stable. There are no more Quartz timepieces nor manual wind pieces all are Perpetual. 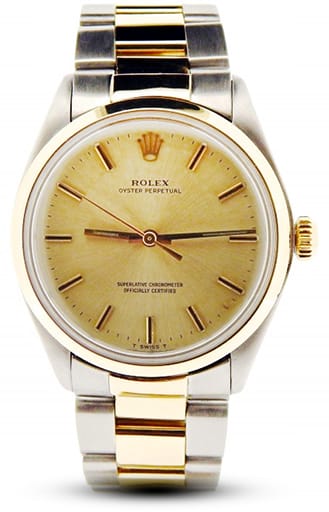 In 1931 Rolex patented a self-winding watch movement, this was one of the first movements to be wound through the means of a rotor ‘weight’. This weight moved as the wearer moved their arm and wrist, constantly winding the mechanism. Hence the moniker ‘Perpetual’ as it would be perpetually wound.

At that early juncture in Rolex’s history, the first Perpetual movements were not solely designed and produced by Rolex. They were originally modules that consisted of rotor assembly mechanisms that could be bolted onto the back of an existing movement, called the Hunter from movement maker Aegler. Adding a module onto a pre-existing movement meant an even thicker movement which needed even more space in any watch case. To fit into the then new feature case, the Oyster, it needed to be even more spacious with a deeper caseback. The bubbleback was born.

Though some of the Rolex reference history is vague and lost to the annuls of time, the first documentation with true indication of the first Oyster Perpetual model was in 1950 when the Oyster Perpetual makes its first appearance. A number of calibres were used such as the 645 and 1030, which was also featured inside the early Submariner and the Explorer.

From 1959 onwards the Rolex Oyster Perpetual No Date all featured automatic movements (hence the name) screw down back and screw down crown. As a model the No Date was always 36mm in size, featuring a plastic crystal and a 26 jewels movement. All starting with reference 1002 through to reference 1038, from reference 1003 onwards until the 1038 they were all available with either fluted or milled bezels. Available at the time with a selection of bracelets and available in stainless steel, steel and gold with yellow, white, pink gold bezel. Or even the whole watch in solid pink or yellow gold. The two calibres that feature within this generation of Oyster Perpetual are the 1560 and the 1570. The production for this Oyster Perpetual ended in the early to mid – 1980s. 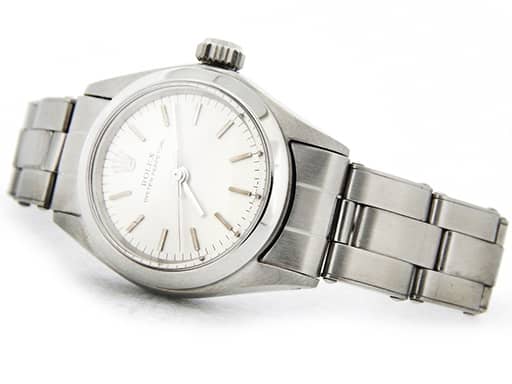 The year 1964 saw the first Ladies Oyster Perpetual featuring the 26 jewel calibre 1130, all with plastic crystals, a small case at 24.6mm diameter and available with oyster or jubilee bracelets. Reference 6618 was stainless steel with a smooth bezel, no fluted bezels here! From 1974 the Lady’s Oyster Perpetual got an upgrade to the new calibre 2030 this time featuring 28 jewels and it saw one of the first introductions of the Hack function. Reference 6718 was the first with this new movement and similar to the 6618 was all in steel with a smooth bezel and exactly the same case dimensions.

The Lady’s version kept going until 1998 with two additional calibres being the difference, from 1983 till 1995 saw the introduction of the calibre 2130 and from 1995 until 1998 saw the calibre 2135 surface. This was the first time the Lady’s Oyster Perpetual increased its size from 24.6 to 25.9 almost a mid-size. These new calibres now have 29 jewels but to the owners the biggest difference was the inclusion of sapphire crystal. Reference 67180 was the first of the 5 figure reference Lady’s Oyster Perpetuals.

The new iteration the reference 76080 saw another change in size, this time slightly smaller to 25mm. The new calibre inside the 2235 now has 31 jewels, other than this and the general updates on all the bracelets everything is the same.

According to its size, the Oyster Perpetual is equipped with either calibre 3132 (39 mm version), 3130 (36 and 34 mm versions), or 2231 (31 and 26 mm versions), three self-winding mechanical movements completely developed and manufactured by Rolex. Each of the movements are certified Swiss chronometer, a designation reserved for high-precision watches that have passed the Swiss Official Chronometer Testing Institute (COSC) tests. In calibres 3132 and 3130, the oscillator – the true heart of the watch, has a blue Parachrom hairspring patented and manufactured by Rolex in an exclusive alloy of niobium and zirconium. The Parachrom hairspring offers great stability in the face of temperature variations and remains up to 10 times more precise than a traditional hairspring in case of shocks as well as having anti-magnetic properties.