History of the Rolex Oysterdate -

Although the name is a byword for luxurious exclusivity, Rolex has a well established history of also creating watches for those with more modest bank balances. From the outset, founder Hans Wilsdorf was keen to accommodate people who couldn’t quite stretch to a fully-fledged Rolex, and endeavored to get his models onto as many wrists as possible, in whatever form that took.

The most obvious example is sister company Tudor, famous for the same sort of engineering excellence but with movements bought in from third party manufacturers, and sold at much lower price points.

But there are a small number of watches that proudly bear the Rolex name which have been specifically created as lower cost alternatives to more recognizable models in the catalog, and the Oysterdate is one of them.

Like the vintage Tudor watches, the reason the Oysterdate is one of the least expensive Rolex pieces is down to its movement. The range, which started life in the 1950s and was still featured in the brand’s lineup until as recently as 1989, have always been manually-wound models. That makes them a distinct rarity for the company that invented the automatic, self-winding mechanism, known as the Perpetual. In addition, all four of the Oysterdate references were fitted with non-chronometer certified calibers—meaning they had not passed the Official Swiss Chronometer Testing Institute’s (COSC) tests for accuracy and resilience. As such, the Oysterdate wore the ‘Precision’ text on its dial, rather than the ‘Superlative Chronometer Officially certified’ we are more used to seeing.

So the Oysterdate was very similar to one of the biggest names, not just in Rolex’s canon, but in horology in general; the Datejust. But as well as having a different type of movement, the Oysterdate was also smaller, coming in at 34mm versus the traditional 36mm of the DJ. And, in keeping with its entry level status, it was only ever available in stainless steel, whereas Rolex’s dressier pieces often appeared in all kinds of precious metals. 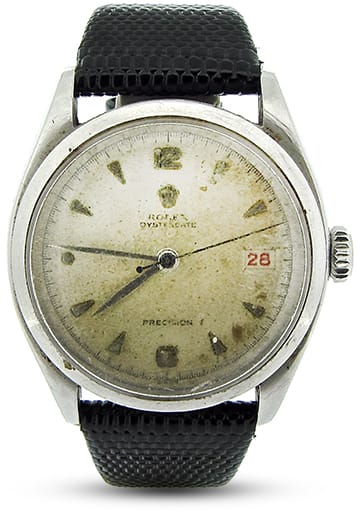 Unusually for Rolex, the Oysterdate went through all of its improvements and upgrades in the first few years of its life before settling onto a winning formula and spending the next three decades untouched.

The debut reference, the ref. 6094, was released around 1953. Available with a black or white dial, covered with an acrylic crystal, it came with sword-like hands and an Oyster bracelet. Power was from Rolex’s in-house Cal. 1215, a 17-jewel movement and the date version of the base Cal. 1210.

An updated reference followed soon after, the ref. 6294, which replaced the dauphine hands with straight batons. Halfway through its run, Rolex perfected their magnifying Cyclops lens, so there are examples of the ref. 6294 both with and without it.The ref. 6494 came next, introducing a wider range of dial colors, and in 1958, just five years or so after its launch, the Oysterdate received its fourth variant, the ref. 6694. 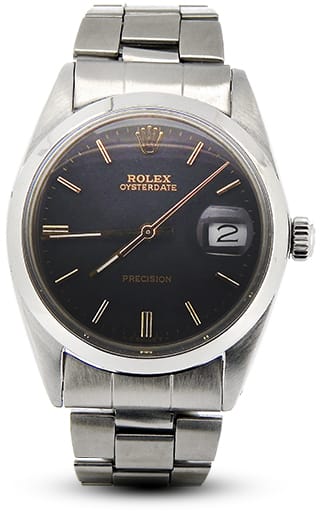 After that, the Oysterdate just stuck with the ref. 6694 for the next 30 years. No more improvements were made, and the watch lived very much in the shadows of its more illustrious stable mates. In fact, it became one of the least known models in the whole lineup, with even some devoted brand followers unaware it existed.

Even so, the Oysterdate remains one of the most interesting creations from the world’s most famous watchmaker, and today vintage examples are becoming increasingly sought after.