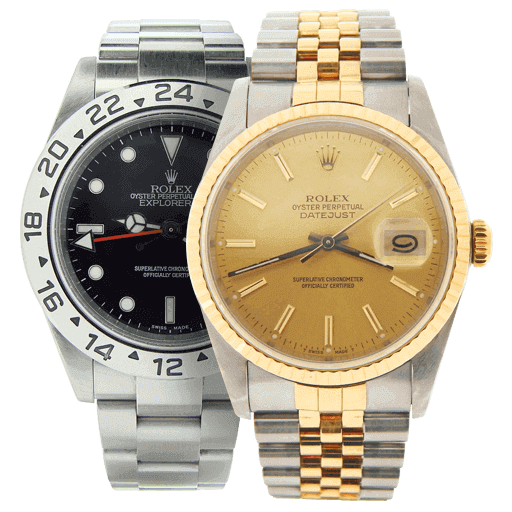 Founded by Hans Wilsdorf in 1905, Rolex cultivated a reputation that is synonymous with quality, prestige, and performance. This is why used Rolex watches and vintage Rolex timepieces maintain strong intrinsic value and function. In fact, Rolex hold their value better than any other watch brand. Whether you buy a pre owned Rolex watch online for yourself or receive one as a gift, it is so much more than a timepiece. It is an investment you can wear on your wrist. It’s a milestone in your life. It offers sentimental value that can last generations.

Our low Rolex prices can save you up to 70% when you buy a Rolex watch you love from the comfort and convenience of your home. Choose the classic look of the Rolex Datejust, or the flagship symbol of success with the Rolex Presidential Day-Date. Also check out our wide selection of luxury sports models from the Rolex Submariner to the Explorer II, and much more. BeckerTime has been buying and selling pre owned Rolex watches online for over 20 years. We are experts in what we sell and offer a safe, secure buying experience with the best customer service. Discover our fine collection of used Rolex watches at competitive Rolex prices.

Filter Rolex by Model or Metal-Type:

Rolex the Beauty the Magic

Nothing says you have arrived like a Rolex. Of all the ways a person can extrude confidence, taste, affluence and success, a Rolex watch is the king of them all. You can keep your iPad, your Gucci and your Jimmy Choo’s, the only way to really display your status in life is by owning the best watch in the world.

With every consumer item there is compromise. Whether it’s cost, size, practicality or comfort. For many, that compromise is worth the sacrifice, for others, it mars the experience.

A Rolex is the only luxury object that doesn’t need compromise. It is the perfect blend of form and function. A Rolex has sleek lines, the signature crown and the well-earned reputation for making the finest timepieces in the world. The very name is synonymous with style and quality, and owning such a beautiful creation is a pleasure that will last a lifetime.

The magnificent craftsmanship that goes into the manufacturing of each and every piece is the reason the luxury timepiece maker is so famous. It’s also why their watches are so coveted. It’s almost impossible to say with any confidence that you have the very best in the world. With a Rolex you can.

The greatness of Rolex is exemplified in its connection to historic achievements and great events in human history. Here are just two:

Rolex has been at the forefront of innovation in watchmaking since the early twentieth century. There is nowhere on this earth that a human can go where a Rolex cannot.

Anybody who is looking for a truly memorable gift, or a timepiece that will last a lifetime, can find it with a Rolex.

Has a Rolex changed your life? Have you any stories about the watch?

In the world of luxury watches, there’s Rolex and there’s everyone else. Rolex is perhaps the most universally recognizable emblem of success and achievement. A Rolex, whether it’s a used Rolex or brand new, represents more than just a fine timepiece. It’s honed and perfected over a production run that often stretches into decades. Ultimately, it symbolizes a defining moment in the life of the wearer. It marks the point in your journey where your aspirations became a reality, and your goals, or at least some of them, were reached. It then joins you as a constant companion, a chapter in your story, accompanying you on to ever greater accomplishments.

Whether you buy a pre owned Rolex online as a long-coveted favorite for yourself to celebrate a career or personal milestone, or receive one as a gift to commemorate a graduation or as thanks for a job well done, taking ownership of a Rolex watch is a very special occasion.

Let’s look at some of the benefits of buying a Rolex watch online, whether it’s your first, or next pre owned Rolex purchase.

Let’s get the money aspect out of the way first. A brand new Rolex, like a brand new anything, is subject to depreciation once it goes from being ‘new’ to being ‘used’. And, much like buying a new car, that transformation occurs the second you leave the store with it.

Being the first owner of a Rolex lands that big financial burden squarely on your shoulders, which can be a bitter pill to swallow. However, it is great news for those that follow. Once that initial hit is out of the way, buying the watch as a pre owned piece comes with a sizeable drop in price.

At Beckertime, we have always made it our mission to try and dispel the myth that Rolex is expensive. While the initial layout might seem high, many of the brand’s models actually appreciate in value over time. This makes them the ideal purchase not just for enthusiasts and collectors, but for those looking for a sound investment. Rather than being a frivolous indulgence, your watch now becomes an asset. Retaining it is like waiting for a fund to mature.

Some pieces, of course, perform better than others as investments, and for a number of reasons. As a series is updated, for example, and a new model replaces its predecessor, the older watch instantly becomes more desirable as the end of its production run means a finite number remain in circulation. With no more being made, it gains an inherent rarity value that only increases as time goes on.

A model range being discontinued completely has an even greater effect. When the venerable Day-Date, or Rolex President’s watch, received a major face lift in 2008, ballooning from its age-old 36mm case to a much more substantial 41mm and becoming the Day-Date II in the process, initial reaction was mixed. It was produced concurrently beside the classic series for just a few years until it was withdrawn in 2015. Its short production run makes it an evermore sought after piece on the used Rolex market.

But, here’s where Rolex is different. Unlike a car, whose value drops off a fiscal cliff the moment you drive it out of the showroom and then keeps dropping until it is essentially worthless, there is a definite glass floor beyond which the price of a Rolex will not fall. Eventually it levels off, meaning selling the watch again in the future leaves you with much less of a sting. If you can buy a model today and sell it in 10 year’s time for around the same amount as you paid for it, you have been wearing one of the most desirable watch brands in the world for a decade for free.

Rolex is one of the few watch manufacturers—in fact, one of the very few manufacturers of any luxury item, whose products retain their worth so well over the years. That alone would be enough to set them apart from their legions of competitors. Yet, under certain circumstances, they are able to do even better.

The choices in both what and where to buy is higher than ever before, with an almost overwhelming selection available to you and the pre owned Rolex market continues to get stronger year on year.

Greater Selection To Choose From

Hand in hand with the financial advantages we looked at above, the increase in purchasing power that comes with lower buy-in Rolex prices opens up doors to options that would have remained otherwise closed.

The pre owned market brings a wider world of more exotic pieces within reach, watches that would have been left inaccessible if you had set your heart on o