Midsize Rolex Watches - From the Datejust 31mm to Yacht-Master 35mm

To Make Sure You Get The Size Right

It is even more critical today with the recent trend for large pieces. But, getting it wrong can seriously detract from an otherwise great look.

Wearing a model that is too small can leave you looking like you are wearing a child’s watch by mistake. Too big, and you risk coming across as a goodfella.

Of course, two different watches that are technically the same size can wear bigger or smaller due to a number of factors, such as the relative dimensions of elements like the lugs, the crown or pushers, if it has them. The type of material it’s made from can also have an effect; a rose gold watch, for instance, will generally look smaller than a yellow or white gold one as the color of the metal tends to blend in slightly with skin tones. Even the choice of band can influence the appearance of size, with a leather strap making the whole watch appear slimmer and lighter than the same piece on a metal bracelet.

Midsize Rolex Watches For Those In The Middle

Lately, the line between what constitutes a ladies watch and a man’s watch has become decidedly blurred. While anything below 30mm still falls very much into the female category, more and more women are wearing a range of sizes traditionally aimed at a male audience.

A 36mm piece was once the upper limit and the standard for men’s watches. Now, we see it as being on the small side for men and an ideal size for a ladies model.

Even larger pieces, such as that most manly of chronographs, the 40mm Daytona, have been spotted on A-list female wrists. Rihanna, Victoria Beckham and Jennifer Anniston are all fans.

But what about those people who are right in the middle? Men with small to medium size wrists, or women after something with a little more presence than the delicately conventional, but not as outright masculine as a Daytona or a Sub.

Rolex have bridged the gap with several of the offerings in their lineup, releasing models with a true unisex appeal.

Below we’ll take a look at some of our favorites.

Although not officially fitted with the ‘Lady-Datejust’ label like the current 28mm piece, the 31mm Datejust has always been aimed specifically at women. In fact, ‘the men’s watch women prefer’ was the tag line from one of Rolex’s more recent advertising campaigns about this specifically sized watch.

As a family, the Datejust has enjoyed one of the longest unbroken production runs of any of the models in the brand’s history. Reaching all the way back to 1945, it has been a mainstay in the collection; once a true innovator and now almost a trademark of the company as a whole. 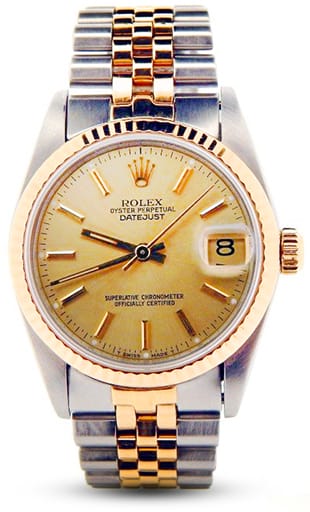 The 31mm version is just one of five different sizes available for the Datejust. The smallest 26mm sprouted a couple of millimeters in 2016. But, the range grew at the other end as well with the introduction of a once unthinkable 41mm piece. In between lies the ubiquitous 36mm. This is the first iteration’s size and the one that put the watch on the map, along with a 34mm variant. They called it the Date rather than the Datejust. It’s essentially the same watch,  but Rolex made it almost exclusively in steel rather than precious metals (I know, it gets confusing).

The Average Watch Size Has Grown

Over the years, the average watch sizes continued to grow.  As a result, the 31mm example went from being considered a midsize in vintage collector circles to being described as small in the current catalog. It all really seems to depend on your own interpretation.

One thing that has never changed is the quality and attention to detail, as well as the sheer scale of choice, in the Datejust range.

Rolex designed the watch to appeal to literally everyone, with a model out there somewhere amongst the countless different variations that matches any taste.

During its 73-year history, Rolex made it in every possible combination of metal, bracelet, dial and bezel; from the subtly understated to the grandstanding showcase. It can be worn as the casual daily beater or the extravagant centerpiece, and everything in-between.

For many, it is the only Rolex they will ever want or need. For others, it can mark the start of an obsessive collection.

As a ladies watch, the midsize Rolex 31mm model may be the perfect every day companion, offering more versatility than the next size up or down. It is an always elegant timepiece that can go from office to after party without breaking stride.

Whether its festooned with diamonds or unassumingly low-key, no one in a Datejust has ever been over or underdressed.

On its release in 1992, the Yacht-Master brought with it a small handful of firsts.

It was the first all-new creation to emerge from Rolex in nearly 30 years. It also debuted a new metal combination—stainless steel and platinum, dubbed Rolesium in Rolex-ese. And it became the first of the brand’s sports watches to be offered in a choice of three sizes.

Splitting the difference between the full 40mm men’s model and the 29mm ladies watch, a 35mm example surfaced in 1994 to entice the middle ground.

Originally meant to be a complete reworking of the omnipresent Submariner,  Rolex eventually launched the Yacht-Master as its own entity. It was a more luxurious nautically-themed offering than the rough and ready diver’s watch. However, the two pieces have more similarities than they do differences.

The copy/paste styling gave the pair identical dial layouts and hands, as well as a shared movement. The iconic bezel remains the most instantly recognizable feature on both. Although, the Yacht-Master’s surround is bi-directional. Also, it’s only been forged from either precious metal or Cerachrom in the contemporary series. And where they engraved the Sub’s markings, the skipper’s watch has them embossed and raised from the surface.

Other than that, the tracing paper designers at Rolex softened the Yacht-Master’s lines a little. And, with its water resistance reduced to 100m rather than the Submariner’s 300m, they were able to give its case a flatter underbelly that sits more comfortably on the wrist.

For Men Or Women

The midsize Rolex 35mm version is one that either men or women can genuinely wear. Also, Rolex issued this version with a number of options. They also released all yellow gold and Rolesor models alongside the Rolesium examples. Plus, they came with a number of different dial colors—with white, silver, blue and mother-of-pearl among them.

Today, the midsize and ladies Yacht-Masters have been retired. However the 37mm piece is taking the place of both beside the 40mm men’s model. That means the vintage and pre-owned market is the only place to find them, and they remain surprisingly attainable.

For a watch with as much pedigree, and with as much weight in precious metal, the midsize Rolex 35mm Yacht-Master represents a great buy and a strong investment. There still remains finite quantities of it out there. This means prices are only going to go one way over time.

An opulent re-imagining of one of the all-time design classics, the Yacht-Master is built for a life of lavish indulgence.

The midsize Rolex is a welcome and often necessary addition to the range. Especially from a brand that recognizes the importance of getting every single detail absolutely right.

As a ladies watch, it gives just a little more presence than the traditional sizes. For men, it can give the perfect fit when modern trends leave them with just too much watch going on under a sleeve.

At Beckertime, we have a wide range of midsize Rolex watches in our online store. Swing by and find your next favorite timepiece.