There is a very good case for describing the Rolex Air-King series as the forgotten watches of the brand’s portfolio. In fact, it almost seems that for more than 30-years or so starting in the mid-fifties, even Rolex sort of forgot about them.

And even when they did make the switch, it was really only to house a new movement rather than introduce some world-shattering redesign. 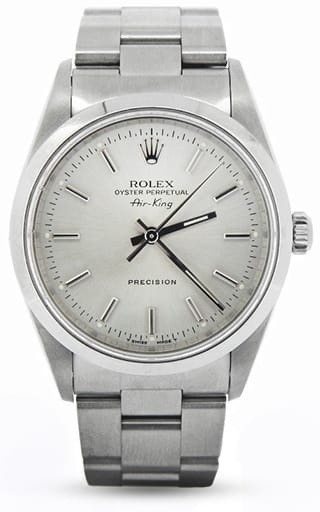 The Air-King name is one that dates back to the darkest days of the Second World Wcaar. The incredible heroics of the U.K.’s Royal Air Force were the only thing that stood in the way of the German invasion of England. News of their desperate but ultimately successful defense of the country during the Battle of Britain in 1940 became the stuff of folklore worldwide, and soon came to the ears of Rolex founder Hans Wilsdorf. A true anglophile, who had built his fledgling business in London at the turn of the century, Wilsdorf set about creating a family of aviation-based ‘Air’ watches in tribute to the brave pilots.

By the end of the war in 1945, the others in the collection (the Air-Tiger, Air-Lion and Air-Giant) had all been retired, leaving only the Air-King in production. With the exception of a couple of years well-earned rest between 2014 and 2016, it has been a constant in the catalog ever since.

Its styling has also been fairly consistent during that long life too. While there have been fleeting references that brought in a date function or added some precious metal to the case, the watch has remained humble—the vast majority were simple three-handers built from stainless steel.

So it is with the ref. 14000. It is one of the most restrained and understated designs in Rolex’s storied history, a 34mm tool model that was made to tell the time and nothing else. It is too, thanks to its small-for-the-modern-era dimensions and underdog status, one of the most appealing bargains in the vintage market today.

Read on for more details about this fascinating reference.

Right up until its latest iteration, the Air-King has always been a 34mm piece. For its time, all the way back in the ‘40s, that was considered conspicuously large, and ideal for a pilot’s watch that needed to be as legible as possible and read in a hurry.

The ref. 14000 carried on with that tradition, even though, released when it was right at the end of the eighties, fashions had most definitely changed and favored far larger models.

The 11.2mm thick Oyster case gives the ref. 14000 more wrist presence than its numbers would suggest, however. It is still an ideal wear for men with smaller wrists, and it is also finding new purpose as an excellent unisex watch. More and more women are adopting 34mm Rolex models and bigger as a daily wear.

The series was made exclusively of steel—316L in this instance rather than the 904L of recent years. Around the dial is a smooth bezel, in steel as well, but there was another version, the ref. 14010, which was given an engine-turned surround. No longer available anywhere in the current lineup, engine-turned bezels feature decorative grooves engraved into the metal. In the case of the ref. 14010, the pattern was made up of numerous hash marks all the way round, broken up by smooth tabs above each hour marker.

When the ref. 14000 was launched, it had upgraded to the next generation Cal. 3000. Beating at 28,800vph, it upped the balance frequency from the former 19,800vph, the first time a high beat caliber had driven any version of the watch.

Yet, while it brought the Air-King in line with the rest of the Rolex portfolio as far as speed was concerned, the Cal. 3000 was the last movement the brand would release without the benefit of a Breguet overcoil. The element responsible for compensating for variations in tension as the hairspring winds down, the overcoil afforded a huge improvement in accuracy as well as a greater shock resistance.

Its absence was the main reason for the Cal. 3000 in the Air-King not being COSC-rated. As such, dials were marked ‘Precision’ rather than with the more usual ‘Superlative Chronometer Officially Certified’ we are familiar with today.

Even so, the Cal. 3000 was an excellent performer; simple, sturdy and reliable, it also found homes inside the era’s no-date Submariner and, those mechanisms that were sent to do their chronometer exams, the Explorer.

Then, in 2000, the Air-King ref. 14000 was replaced with the ref. 14000M. Standing for Modified, this version contained another new caliber, the Cal. 3130. With far more similarities than differences, the Cal. 3130 reinstated the Breguet overcoil, and fastened the hairspring to a full balance bridge instead of a balance cock, as it had been on the Cal. 3000. While it improved timekeeping performance, it was still not enough to be given its COSC certificate, and the ref. 14000M remained as a ‘Precision’ watch too.

The Air-King would have to wait until 2007, when the ref. 114200 took over, before it finally got to wear its Superlative tag.

Somewhat unexpectedly, considering its tool watch heritage and extremely basic persona, the ref. 14000 was actually issued with a small selection of different dial options, something the latest generation doesn’t offer.

You can take your pick from black or white, silver or blue or, a particular fan favorite, a beautiful pink/salmon color.

Likewise, hour markers also varied. They came in a choice of simple stick batons, Roman numerals or an Explorer-esque 3/6/9 variant.

Things like diamond accents on the indexes were never an official release, but you will still be able to find examples of them as preowned buy, customized by third party watchmakers. Similarly, the dials themselves have sometimes been refinished by independent concerns, and so you will occasionally see pieces for sale sporting non-regulation materials such as mother-of-pearl. These modified models can be a lot of fun and certainly offer far more possibilities than the factory released versions, but you have to bear in mind that Rolex themselves will not service the watch and you will have to hunt out a separate maintenance center when the time comes.

One rare alternative for this reference is the (in)famous Dominoes Pizza dial. While Rolex were no strangers to cobranding their watches in times past, it was usually reserved for the ultra high end retailers, the likes of Tiffany and Cartier. However, for a brief time in the 90s through to the early 2000s, the world’s highest profile and respected luxury timepiece manufacturer agreed to let Dominoes include their logo on the ref. 14000 Air-King’s dial, and handed out the watch as a bonus to managers whose stores hit sales of $30,000 a week for four consecutive weeks. A bizarre mishmash of worlds though it is, these double badged pieces turn up periodically and add about a 20%-30% premium on the standard preowned price.

As for luminescence, early models still used tritium (marked ‘T Swiss T’ or ‘Swiss T<25’ on the dial, below the six o’clock index) before switching to the non-radioactive Luminova in 1998 (labeled ‘SWISS’), then to Superluminova a couple of years later (‘SWISS MADE’).

And one last enhancement over the earlier Air-King models, the ref. 14000 was the first to introduce a sapphire crystal, offering a far greater degree of protection than the previous acrylic covering.

As you would expect by now, the Air-King ref. 14000 came fitted with the three-link Oyster bracelet, the most sporty and utilitarian band Rolex offer.

Because of the smaller size of the case, the Oyster is actually 19mm at the lugs (20mm is generally more usual for Rolex’s men’s models) and it tapers to 14mm at the clasp.

Again, like with the replacement dials, you will see plenty of examples sitting on either substitute official bracelets (it looks especially good on the Jubilee) or else with a leather strap on the vintage market.

Due to the unpretentious nature of the watch, it can suit pretty much whatever it is matched with, dressed up or down as occasion demands.

The Air-King ref. 14000 is definitely one of the unsung heroes in the archives. A name that pays tribute to the brave few of the RAF, it offers the brand’s unparalleled engineering prowess, with a design that is simplicity itself, in a size that look as good on a male or female wrist.

Head over to our online store for a selection of guaranteed authentic examples.