Rolex Watches You Can Only Buy Preowned -

Rolex Watches You Can Only Buy Preowned

Although you’d be forgiven for not believing it, Rolex is a manufacturer in an almost constant state of flux. While the bedrock watches in its collection appear to have barely altered over several generations, the truth is, they are not only routinely updated with new and improved elements, but some versions are retired completely, and more often than you might think.

What’s more, the brand has a habit of withdrawing certain models with little or no heads up to its fan base, and the first time many become aware of it is when the watch is no longer anywhere to be found in the catalog.

Stranger still, it is not even a practice contained to the least popular pieces, with many-a favorite being dumped unceremoniously, and leaving those who wanted one with no other option but a trip to the preowned market.

Below we take a look at four of the best discontinued Rolex watches.

Without doubt one of the most iconic models ever made, the GMT-Master has been the ultimate in luxury traveler’s watches since its debut in 1954.

That original, the ref. 6542, was given the blue and red color scheme on its bezel that would soon be nicknamed the Pepsi, after the famous soft drink’s cans. Not only a uniquely eye-catching component, it also served a practical purpose; the surround was engraved with a 24-hour scale to display the second time zone, with the red symbolizing the daytime hours, and the blue indicating the night for an at-a-glance distinction between the two. 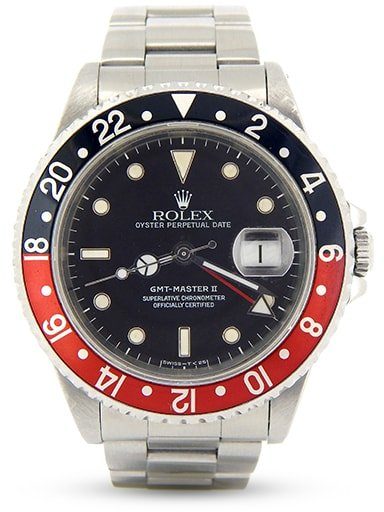 So when a black and red version emerged in 1983 on the inaugural GMT-Master II (the ref. 16760, the first piece to allow for the pair of hour hands to be set independently of one another) it made even more sense. What better representation of the nighttime than black?

It immediately became known as the ‘Coke’ bezel for obvious reasons, and was hugely popular, staying a part of the lineup until 2007, when the last example, on the ref. 16710, ceased production.

That means that, A) there has never been a Cerachrom Coke bezel, Rolex’s extraordinarily tough ceramic alloy, and, B) to get your hands on a black and red version of this legendary watch, you will have to dip into the archives.

Many Rolex devotees have been clamoring for a reissue for years, and it would undoubtedly be a huge seller for the brand should it ever happen. The modern day Pepsi models are so in demand they are the epitome of money-can’t-buy luxury, and there’s no reason the Coke wouldn’t be the same.

Is it likely? Impossible to say but it is worth noting the 40th anniversary of the ref. 16760 (sometimes referred to as the Fat Lady) is coming up in 2023, and no one enjoys a good birthday blowout more than Rolex.

The Datejust II and Day-Date II

The Datejust, launched in 1945, spent its entire production run with 36mm as the maximum size. The Day-Date, released just over a decade later in 1956, was only ever available as a 36mm.

That all ended relatively recently, when Rolex finally succumbed to audience pressure and brought out larger versions of each measuring 41mm; the Day-Date II in 2008 and the Datejust II the following year.

Although they were well received in general, each was a significant departure from the original and split opinions as a result.

While the added millimeters were certainly considered a good thing for a modern dress watch, some felt the individual proportions had strayed too far.

The bezels became wider and, although the case got broader, the bracelet stayed the same, requiring thicker lugs. As a result, both had considerably more muscular lines, along with larger indexes on the dial.

In all it just seemed a bit too much for too many and neither of the models lasted very long—the Day-Date II was replaced in 2015 with the Day-Date 40 and the Datejust II in 2016 by the Datejust 41.

These, though similar in dimensions on paper, were very much simply scaled-up versions of the classics, with the former elegance reinstated.

However, both the Day-Date II and Datejust II have garnered loyal followings as preowned buys, with an enthusiastic number appreciating their more masculine bulk. You won’t find the same scope of different metal, bezel or dial colors as the traditional models, but they are fine watches nonetheless.

Additionally, they could well be a consideration for those looking to spot the next appreciating asset, with their low production numbers giving them an inherent scarcity.

Definitely one to consider.

As we mentioned earlier, Rolex’s patented Cerachrom is a revolutionary material, touted as fade proof, scratchproof and virtually unbreakable.

It has found a home on the bezels of much of the Professional Collection, everything from the Submariner to either of the Yacht-Masters, and is guaranteed to stay looking as if it has just rolled off the production line for decades to come. 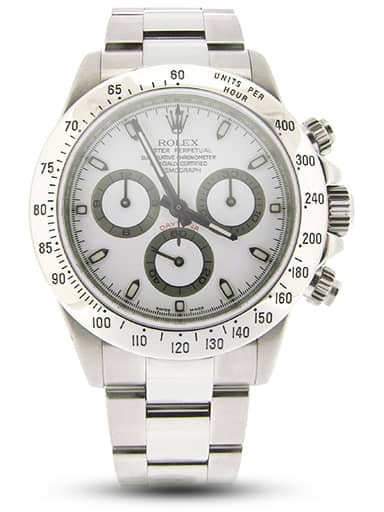 You will also see it on plenty of examples of the brand’s flagship chronograph, the Daytona. The racer’s watch is available with the ceramic surround in steel, all three colors of gold—red, yellow and white—along with the ultimate statement, platinum.

However, the gold models are still issued with metal bezels as well, giving a different, more vintage–inspired look that appeals to many fans.

Not so with the steel pieces. Those watches, which have topped just about every must-have-but-can’t-get list for the last five years, only have a Cerachrom option, with the last stainless bezel being seen on the ref. 116520, which was dropped in 2016.

The good news is, those references now represent possibly the most accessible route into Daytona ownership. Starting prices for a ref. 116520 hover around the $16k-$17k mark; still far from a giveaway, but certainly cheaper than a modern era steel model and actually even less expensive than the previous generation Zenith El Primero-powered pieces, the ref. 16520.

Issued with either a black or white dial, they have the classic Daytona look but benefit from the very latest technology on the inside; they were the first iteration to receive Rolex’s legendary Cal. 4130, the only home-grown chronograph movement the brand has ever built.

Like all Daytonas, the ref. 116520 is both handsome and extremely rugged, made to endure the challenging environment of the racetrack and perform faultlessly as a stopwatch.

But beyond that, buying into the Cosmograph family means you have secured one of the surest investments horology can offer.