Rose gold, much like classic yellow gold, tends to drop in and out of fashion as tastes change from one decade to the next. Unlike the more neutral metals commonly used in watchmaking, such as stainless steel and, to a lesser extent, white gold, the distinctive reddish hues of rose gold become incredibly popular for a number of years, then fall out of favor for a while, before the cycle starts all over again.

It has been this way ever since the first red-colored jewelry started to emerge in the late 19thcentury, when Carl Fabergé popularized the metal in his intricately bejeweled eggs.

Fabergé’s patronage led to the precious metal being called Russian gold at first, and it has alternatively been known as ‘magic gold’ and ‘king’s gold’ throughout its history.

An alloy created by mixing in different quantities of copper, the only red metallic element, to the smelting process, the exact color depends on just how much copper is used, giving a range from a deep crimson to just the faintest hint of pink. The end result is a unique tint that lacks the in-your-face boldness of yellow gold, while offering a comforting warmth that works for either casual or more formal models, and for both men and women.

For Rolex, rose gold has been a staple in their lineup from the beginning—the timelessness of their designs lending themselves perfectly to any shade. 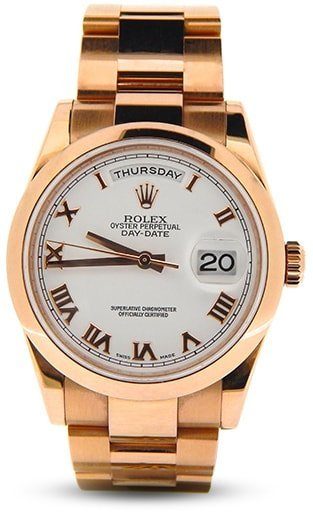 Right up until very recently, the world’s most successful watchmaker had to rely on their metals being supplied from an outside source. However, in 2005, Rolex built their own foundry in their Plan-Les-Ouates base in Geneva, giving them complete autonomy over the production of all their gold alloys; white, yellow and red, as well as the 950 platinum they use on their highest of high end pieces.

It also, crucially, allowed them to address one problem common to all rose gold pieces—fading. Exposure to certain conditions, such as UV light, sweat or chlorine, has long caused red gold to pale over time. At Rolex, an addition of 2% platinum into the mix locks in the color, ensuring their new creation, known as Everose, retains its lustrous glow.

Ahead of the game as always, Everose arrived just as its charms became on trend once again, and Rolex rolled out several of their biggest hitters in their patented formula, taking brand stalwarts in a completely different and refreshing direction.

Below, we will take a look at some of the most effective models, past and present, to emerge in rose gold.

Perhaps to offset pink gold’s reputation as a more female oriented shade, the piece Rolex decided to debut in Everose was the especially masculine Cosmograph Daytona.

The world-beating racer’s watch, at one time an unmitigated failure for the brand, has become not only their most successful model of modern times, but also the watch offered in the most diverse range of guises of any in the professional collection. 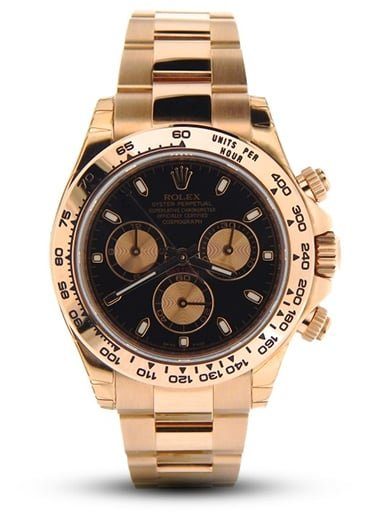 The ref.116505, the very first reference in the Daytona’s half century to be offered in rose gold, emerged in 2008. While Rolex had already perfected and introduced their ceramic bezel, known as Cerachrom, by that time, the 116505 was unveiled in solid gold, including the engraved surround.

It brought a fresh twist to the aesthetic, displaying a different personality that resounded well with fans. What’s more, it was a Daytona that people had at least an outside chance of acquiring without having to languish on a waiting list for years on end.

It was so well received in fact that it is still part of the contemporary lineup, along with the Cerachrom versions that came along in 2011.

Both have been given a choice of dial colors, ranging from a subtle ivory to a chocolaty brown, but all of which complement the warm tones of the case. Some variants pick out the trio of sub dials in contrasting tones, others are happy to stay with a more monochromatic look. In addition, Rolex’s first ever rubber strap, known as the Oysterflex, is deployed across several versions, injecting a more sporty aspect.

Inside, the homegrown Cal. 4130 is the brand’s most conspicuous recent triumph, recognized as perhaps the finest and most reliable chronograph movement ever made. A product of five years of development, the column wheel-controlled, vertical clutch mechanism eliminates any hint of shudder on the central seconds hand as it is started, stopped or reset.

In all, the Everose Daytona only added to the hysteria that has been part and parcel of the watch’s existence for the last 20 or so years. An icon in every sense of the word, there is a version ideal for every wrist.

On its launch in 1992, the Yacht-Master was quite clearly seen as a more luxurious take on the legendary Submariner. That was certainly no cause for complaint; after all, if you were after the perfect design for a sports watch, where better to start looking than the world’s favorite diver?

So the 2015 release of the first Everose Yacht-Master, the ref. 116655, was as close as we have ever gotten to fulfilling the dreams of many fans who have long hankered after a pink gold Sub.

But it went a lot further than that. With its black Cerachrom bezel and Oysterflex bracelet (the Everose Yacht-Master was the watch that actually debuted Rolex’s rubber strap) it changed up the look of the model so dramatically you could be forgiven for thinking it belonged to a completely different series.

Whereas the others in the range, those forged from a blend of steel and platinum (known as Rolesium in Rolex-ese, another innovation first seen on the Yacht-Master) or the yellow gold versions from the archives, were more conservative, opulent efforts, the Everose models were all action. Even the half and half rose gold Rolesor examples lacked the same sort of go-anywhere, do-anything character.

It has been, arguably, the brand’s best use of their proprietary alloy to date, and the fact it is available in both 37mm and 40mm sizes only increases its appeal.

The Yacht-Master has other points in its favor over the Submariner as well, depending on your point of view. Whereas the dive watch has graduated to Rolex’s Supercase in recent years, with lugs and crown guards nearly twice the width of earlier editions, the Yacht-Master has retained its svelte lines. The more muscular Sub has been splitting opinion since its inception, with some appreciating the broad-shouldered look, and others preferring the elegance of the past. In addition, the nature of rose gold means it wears slightly smaller than the numbers would suggest, as the color of the metal tends to blend in with skin tones. So those with slender wrists can get away with wearing the 40mm version more readily than with other watches in the catalog.

Beyond that, it is driven by Rolex’s time-honored and faultless Cal. 3135, a movement found inside the brand’s best since 1988. Known as the watchmaker’s friend for its reliability and ease of maintenance, it is acknowledged as a giant in modern horology.

The Everose Yacht-Master has been one of the most popular contemporary additions to the fleet. The inspired pairing of warm Everose gold with the black ceramic bezel and sporty Oysterflex give it a thoroughly up-to-date aesthetic, from a manufacture that rarely delves into the unorthodox.

If the Everose Yacht-Master is Rolex at its most unconventional, then the Day-Date is just about as traditional as can be.

Alternatively known as the President, it symbolizes the establishment as unashamedly as the British Royal Family. Or, at least, it did. 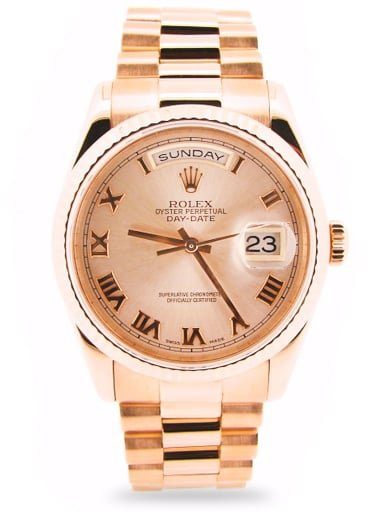 Once the sole preserve of captains of industry or leaders of nations, these days you are just as likely to see some variation on the wrists of hip hop moguls or heavyweight boxing champions.

Originally appearing in 1956, it was the first automatic watch ever made to feature both the date and day of the week spelled out in full, and with the exception of the Datejust, is the watch cast in the most bewildering number of combinations of metal, bracelet, dial and bezel design of any in Rolex’s prodigious output.

Over the last 60+ years, just about the biggest visible change made to the design has been the introduction of a 40mm model to pair alongside the classic 36mm.

Other than that, it has followed standard Rolex operating procedure of only the most gentle outward evolution, its styling hardly altering over more than six decades, while the interior is kept right on the cutting edge of what is achievable. The latest Cal. 3255 powering the 40mm version is protected by a total of 14 patents and comes with Rolex’s own take on the Swiss lever escapement, the Chronergy, reportedly 15% more efficient than conventional mechanisms.

While a yellow gold Day-Date is as archetypal to the brand as it is possible to get, the rose gold examples have long been popular with those who enjoy a bit more subtlety in their wrist wear. The warmness of the color downplays many of the watch’s more grandiose aspects, while still leaving it with a refined elegance. It can be paired with just about any dial color you can think of, each one imparting a hint of the wearer’s personality, and can be given a wash of diamonds across the entire face or restrict them to accenting the hour markers or highlighting the bezel.

Particularly understated fitted with a leather strap, one of the very few from Rolex with that as an official option, it is also available with either the utilitarian Oyster bracelet for a more low-key image, or else with its eponymous semi-circular three-link President band for the purist.

It may well be eligible for its pension, but the Day-Date is today what it has always been; the flagship of the entire Rolex range, and perhaps the most aspirational model from any manufacture.