The 29mm Rolex watches are particularly few and far between. In fact, the modern lineup doesn’t have any examples in this size. However, in the vintage archives there are only two models that measure up.

Fortunately, both of them are real beauties.

Each one, the Lady-Datejust Pearlmaster and the Lady Yacht-Master, were originally the smallest examples in their respective series. They have now been discontinued and replaced by significantly larger alternatives. The Pearlmaster range now starts at 34mm and the Yacht-Master at 37mm.

While that is certainly in keeping with contemporary tastes among women as well as men, for even larger watches it leaves the standard Lady-Datejust as the sole representative in the sub-30mm category.

However, if you’re looking for something just a little bit different, you’ll need to take a small step back in time.

Below, we’ll take a look at some of the stunning 29mm Rolex watches we offer here at BeckerTime.

The first of the Rolex Yacht-Master line appeared in 1992 with the ref. 16628, a full-size 40mm, yellow gold model with a look that was undeniably that of a Submariner gifted with some fancy clothes and a haircut.

Given its provenance, that shouldn’t have come as much of a surprise. A few years before, Rolex higher-ups had decided, inexplicably, that the venerable Sub was due a complete overhaul. They never disclosed why or how they reached that decision. But, thankfully, at some point, they came to their senses and plans to radically alter possibly the most iconic design in the history of watchmaking went by the wayside.

However, what they had come up with in the meantime was deemed too good to just shelve completely. So, it was released as its own separate entity, the Yacht-Master—a more opulent nautically-themed watch for the world’s well-heeled skippers.

A couple of years later in 1994, two more versions arrived. These were the midsize 35mm ref. 68628 and the 29mm Rolex ref. 69628 Lady Yacht-Master. This is the first time Rolex releases one of their professional range in three sizes.

It wasn’t the last time the Yacht-Master racked up a first for Rolex. Most recently, it became the recipient of the first rubber strap the brand had ever fitted to one of its offerings. The Oysterflex, with its state-of-the-art metallic alloy interior covered with a high performance elastomer, carried on the company’s overriding ethos that if something is worth engineering, it is worth over engineering.

And in 1997, they chose the watch as the test bed for a new combination of fine metals. These were with a stainless steel case and bracelet, topped with a platinum bezel. We know this as Rolesium. Rolex patented it all the way back in 1932. It also remains a feature unique to the Yacht-Master today.

While there is no mistaking the similarities to the Submariner, there are a few subtle but notable differences. Rolex somewhat softened the lines on the Yacht-Master. There are more rounded crown guards and lugs that blend elegantly into the bracelet. On the 29mm Rolex piece particularly, its profile is especially feminine.

Because it only needed to be water resistant to 100m rather than 300m, the case is able to retain a much flatter underbelly. This makes it a more comfortable all day wear.

The rotatable bezel, the defining element on the ultimate dive buddy, is bi-directional on the Yacht-Master. And, where the Sub’s surround is engraved, on the skipper’s watch it has numerals and graduations that are raised and polished to stand out against the sand-blasted background.

All told, the Yacht-Master has been an extremely popular choice for both men and women since its launch. It is also available in a variety of precious metal finishes. Perhaps not as versatile as its underwater cousin, it is nonetheless a watch that you can wear up or down as needed. And as a substitute for the ever-present Lady-Datejust, it has a welcome touch of added cachet.

Another fairly recent addition to the catalog, the heavily bejeweled Pearlmaster series also arrived in 1992.

Although the Lady-Datejust range was certainly not lacking for variety, the Pearlmaster offered a little more size and a lot more sparkle. 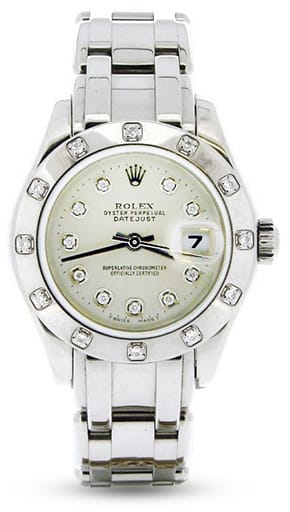 It gave Rolex’s legions of gemologists free rein to work their glamorous magic. They adorned this selection of watches in the lineup with diamonds, rubies and sapphires—either a subtle sprinkling or with a full-on extravagance.

Named After Its Bracelet

The Pearlmaster was actually named after its unique bracelet. They crafted this sophisticated and highly elegant five-link rounded band from 18k gold, as are all the cases across the range. You will find stunning examples in yellow, white and Everose. This is with the Datejust family’s usual bewildering array of dial colors and styles.

Unlike other high end watchmakers, Rolex doesn’t trust any outside concern when it comes to selecting the precious stones they will use in their creations. The gemological department at their Chéne-Bourg compound buys, tests and sets every jewel that goes into each one of their watches.

With the sort of fanatical devotion that has typified the brand since the beginning, the selection process is especially rigorous.

Every diamond that crosses the threshold is X-rayed to ensure its authenticity. By all accounts, of the 20 million that have gone through the procedure, two have been found to be fake. (That’s two, not two million!) Even so, they still test each and every stone.

Rolex employs traditional jewelers to then hand select only the best examples, those classified IF for higher in clarity. Standing for Internally Flawless, it means there are no blemishes visible under 10x magnification. They then hand set the stones into their custom-made settings.

The original range was made up of a choice of 29mm and 34mm models, joined in 2015 by a far larger 39mm piece. Since then, they’ve retired the 29mm Rolex Pearlmaster, making it an especially sought-after watch on the pre-owned market. However, you can view this ladies 29mm Datejust Pearlmaster Ref. 80319 for an impressive example of this popular timepiece.

The two smallest Pearlmasters are powered by the same exceptional calibers as the traditional Lady-Datejust collection—the Cal. 2130 and, post-1999, the Cal. 2230. Both in turn have held the distinction for the highest first time pass rate for accuracy and reliability at the COSC, the Official Swiss Chronometer Testing Institute.

Certainly a watch for the most special of occasions, the 29mm Rolex Pearlmaster is Rolex at its most flamboyant best.