The History of Rolex Pilot’s Watches -

The History of Rolex Pilot’s Watches

It is really a matter of opinion over which genre Rolex is most famous for; diving watches or pilot’s watches.

In the canon there are true icons of each, but the brand’s relationship with aviation actually stretches back further.

Although they can’t claim to be the first manufacturer to develop a wristwatch designed specifically for pilots (that honor really goes to Cartier and the Santos) their highly capable and robustly-made tool models were favored by many pioneers of the early years of flight.

In 1933, crews of the Houston Expedition all wore Oyster watches during the maiden attempt to fly above the summit of Everest, the mission part-funded by Rolex themselves. Led by the gloriously named RAF Squadron Leader Douglas Douglas-Hamilton, the two plane, four man team circled 100-feet above the highest peak on earth before safely returning to base.

All timepieces were reported to have performed flawlessly, despite the vicious fluctuations in both temperature and pressure, along with the unrelenting humidity in the region.

The initial models Rolex made expressly for aviators came about, as with so many things, during the Second World War.

By the time the conflict broke out in 1939, Britain’s Royal Air Force pilots were being issued with the brand’s Speedkings—30mm pieces with manually-winding Hunter movements, a waterproof Oyster case and a 3/6/9/12 dial.

However, while the sturdiness of the construction was appreciated, the dimensions were particularly small even for the era, and so many of the flyers were substituting them for Rolex’s early Bubbleback models and paying for them out of their own pockets. Not only did they have the convenience of an automatic movement but, at 36mm, they were large enough to be easily read in the cramped conditions and highly stressed atmosphere of a wartime cockpit.

Upon learning of just how well respected his timepieces were, and to commemorate the heroism of the RAF during their impossible defense of the U.K. at the Battle of Britain in 1940, Rolex founder Hans Wilsdorf commissioned the creation of the ‘Air’ series as tribute.

The four models, the Air-Lion, Air-Tiger, Air-Giant and Air-King were all large, simple three-handers with highly legible dials and manual wind movements.

By the end of the war in 1945, only the Air-King remained and, barring a two year lay-off starting in 2014, it has been in production ever since.

Going through a number of references, including the extraordinarily long serving ref. 5500 which went pretty much unchanged for 37-years, the present day Air-King is a model at once thoroughly modern and steeped in nostalgia.

Sharing a movement and a 40mm case with the current Milgauss, with all its antimagnetic talents, the dial of the ref. 116900 has been given both Explorer-esque 3/6/9 indexes as well as conspicuous minute markers, making it among the most clearly visible watch faces in the contemporary lineup. Numeral fonts are faithful recreations of the 1940s originals, as is the Air-King signature, and it is also the first ever release from the brand to have the Rolex name and the coronet logo in two different colors.

It has long been among those models thought of as the ‘forgotten Rolex’ but, like its compatriots, the Explorers I and II, the simple utility and tool-like nature of the piece is becoming evermore appreciated, a throwback to the kind of watch upon which the brand first grounded its reputation.

Whether vintage or modern, the Air-King is finally getting to enjoy its moment in the sun.

In the years following the war, Rolex continued to chalk up successes in the aviation world.

Chuck Yeager, in 1947, became the first person to break the sound barrier, in his experimental Bell X-1 aircraft nicknamed ‘Glamorous Glennis’, with a 34mm Oyster strapped to his wrist.

But it would be in the subsequent decade that the most significant strides were made.

1953 saw Rolex bring out the Turn-O-Graph, the first model the brand put into serial production to feature a rotating bezel. The surround could be used for a number of functions, including simplifying navigational calculations, and as such it is considered the manufacturer’s original tool watch. Its modest complication saw it adopted by the USAF aerobatic squadron, The Thunderbirds, after whom it was renamed for the American market.

It would later become part of the Datejust line but enjoyed only limited popularity and was eventually retired in 2011.

Today it, like the Air-King, can be found on the preowned market for surprisingly attainable sums.

But of course, if we are talking about Rolex pilot’s watches from the 50s, there is one name that stands head and shoulders above the rest. 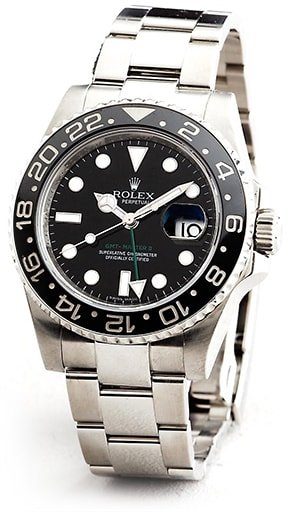 Released a year after the Turn-O-Graph, the GMT-Master was created as a solution to a problem no one had had to face before.

The invention of the Boeing 707, the first commercially viable long-haul airliner, had opened up the initial transcontinental routes and kick started the Jet Age.

Starting service with Pan Am Airways, it also brought about a new and unwelcome phenomena; jet lag. Crossing several time zones at near the speed of sound played havoc with the internal body clocks of the airline’s passengers and, far more dangerously, their pilots.

Working with a Pan Am team led by Captain Frederick Libby, one of the original ‘Sky Gods’ (those pilots who had flown for the carrier before the war) Rolex came up with a watch that could track two time zones at once. Intensive research had shown that having a way to keep crews on ‘home’ time, as well being aware of the hour at their upcoming destination, went some way in offsetting the worst of jet lag’s detrimental effects.

The GMT-Master borrowed the rotating bezel concept from the Turn-O-Graph and the Submariner, also released that year, swapping the 60-minute gradations for a 24-hour scale. An additional hour hand, running at half speed, pointed out the second time on the surround.

As a further aid, the bezel was given a two-tone color scheme, with the top half painted blue to represent the night and the bottom painted red for the daytime. As well as giving an at-a-glance readability, it also lent a distinctive aesthetic that separated the GMT from Rolex’s other releases during the period. A huge fan favorite from the outset, that debut livery was unofficially  christened the Pepsi.

It would go on to be joined by other combinations over the years. A brown and gold version appeared in the 60s, colloquially named the Root Beer, while 1983 saw the unveiling of the GMT-Master II, which not only brought a movement that uncoupled the two hour hands, allowing for the watch to track three time zones, it also introduced the black and red bezel, known as the Coke.

The contemporary lineup includes a blue and black variant, or Batman, as well as models in solid and Rolesor red gold, and two white gold pieces alongside the almost impossible to acquire steel versions.

Quite possibly the most famous and important luxury traveler’s watch ever made, the GMT-Master is legendary even by Rolex’s standards.

Traditionally, Rolex has steered away from overly complex watches. That all seems to be changing now, as recent years have seen them issue two pieces with extraordinary complications; firstly the Yacht-Master II with its regatta countdown and, their newest release, the Sky-Dweller from 2012.

Whether or not the Sky-Dweller is an actual pilot’s watch is up for debate—it would take up a serious amount of the paycheck of even the most senior professional.

But in terms of features suitable for aviators, its different take on the GMT function and the ever useful annual calendar have made it an ideal option.

It hasn’t had the easiest life so far. Originally released in precious metal versions only, the subsequent price tags, coupled with its unorthodox looks, saw it largely ignored. But with the steel models (albeit with white gold bezels) being unveiled latterly its fortunes have been transformed.

Halving the price of the all gold versions has opened up the watch to a wider audience, and its aesthetics have matured to see it become an especially sought after example.

These days you could have a brand new steel Sky-Dweller for roughly what it  would cost to buy a steel GMT-Master II on the preowned market, although whether it will keep its value as much as a modern Pepsi or Batman is something only time will tell.

As you can see, Rolex’s history with the world of aviation is a long and vital one. From the earliest all-purpose Oysters proving their worth in the skies above Everest, through the war years and into the age of commercial flight, the brand has led from the front in innovation and engineering excellence.

Now more a status symbol than an indispensible tool, their pilot’s watches are nonetheless among the finest ever made—backed up by a heritage that is second to none.