The Best of Both Worlds With Rolesor

Rolex first patented the term Rolesor way back in 1933. A portmanteau of ‘Rolex’ and the French for gold, ‘Or’, the twin tones of Rolesor has been used to describe their own proprietary blending of gold and stainless steel ever since.

However, with the brand employing three different colors of the precious metal throughout their range, the combination varies slightly depending on which particular flavor the design uses.

The yellow and pink Rolesor pieces have a case forged in steel, with the bezel, winding crown and the bracelet center links constructed in 18k gold. These are the signature two-tone models that scream Rolex from across the room.

With white Rolesor, only the bezel is made from gold. Although it is similar in tone, it retains an unmistakable glow when paired against the brushed steel.

Best of Both Worlds

The main reason for the twin tones of Rolesor’s continued popularity is its versatility. The coolness of steel can subdue an otherwise overly formal all gold dress watch. Similarly, a dash of yellow or pink adds some welcome warmth to the utilitarian tool-like nature of the brand’s range of stainless steel models.

The flexibility of the arrangement is well suited to just about any piece in the lineup, and below, we’ll take a look at some of the standouts.

The Turn-O-Graph, one of the lesser known names in the Rolex canon, is actually the holder of a number of important distinctions for the brand.

It was the first serially-produced Rolex to be fitted with a rotatable bezel, the groundbreaking element that went on to change the game for professional watches everywhere, not least of course the Submariner and the GMT-Master series.

And it was also the very first two-tone Rolesor sports model.

Beating those two legendary names to market by a year or so, the Turn-O-Graph debuted in 1953, with the ref. 6202. Although it had a very short-lived initial excursion, with only around 1,000 or so produced, by the mid-fifties, the model had proved itself successful. The second generation was released in a choice of all steel, all gold or in yellow Rolesor.

While the ref. 6202 looked almost indistinguishable from the Submariner of the time, these new models were adopted as part of the Datejust family. As such, they struck a good balance between tool and dress watch.

By the end of the decade, they had also become the official timepiece of the USAF aerobatic team, and Rolex changed the model’s name for the North American market in recognition—from then on, it was known as The Thunderbird.

Even so, the Turn-O-Graph has always been the unsung dark horse in the catalog. It dropped out of production for a few years before being reissued in the early 2000s with a clean new look and some eye-catching features, such as a bright red seconds hand and date counter against a crisp white dial.

But with customers still not beating down the door for it, the watch that paved the way for so much was finally granted its well-earned retirement in 2011. The first Rolex to be official military issue, and arguably the brand’s first tool watch, the Turn-O-Graph is a vital part of the Rolex story.

Check out some of the fine examples we have in our online store.

Perhaps the most fitting use of Rolesor’s ambidextrous qualities, the Yacht-Master was designed to go from the rigors of life on the ocean waves to the privileged environs of the yacht club without breaking stride.

Originally touted as a replacement for the Submariner, it was eventually launched as an entity in its own right in 1992, clearly looking like a Sub in a fancy suit—a nautically-themed watch for the more well-heeled.

Much like the Turn-O-Graph above, the Yacht-Master introduced a number of new concepts to the Rolex brand. 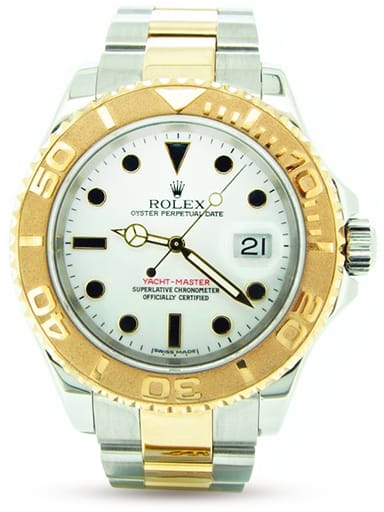 It was the first Oyster Professional watch to be offered in three sizes; a ladies 29mm and a men’s 40mm as well as a midsize, coming in at 35mm.

It was also the watch that debuted Rolesium, a mix of steel and platinum in much the same way that Rolesor blends steel and gold. And, more recently, Rolex’s first ever rubber strap, dubbed the Oysterflex, was fitted to the Yacht-Master.

Although originally only available in solid gold, in 2005, one of the most enduringly popular variants in the range emerged, the ref. 16623, in yellow gold and steel.

The combination of the two metals, coupled with the softer, rounder lines of the case, underlined the Yacht-Master’s luxurious aspirations, as opposed to the Submariner’s more rugged appeal.

It came with a choice of dial colors too, each one contributing to a different aesthetic. The white, silver and champagne faces lent a more understated visual, while the blue, brown and mother-of-pearl were designed to be noticed. The solid gold bezel differed from the Sub, being bi-directional and having its oversize numerals polished and raised from the surface rather than engraved.

Rolex have pared down the range over the years and there are now only a 37mm and 40mm version available, but they have added a pink, or Everose, Rolesor model. With a chocolate color dial, it has a particularly warm richness to its design.

With gracefully curved lugs and a flat belly that makes it a supremely comfortable all day wear, the Yacht-Master makes a sophisticated addition to the tool watch range. Where you can liken the Submariner to the utilitarian robustness of a Land Rover, then the Yacht-Master has the opulent bearing of a fully kitted out Range Rover.

After a disastrous start that went on for decades, the Daytona has now become Rolex’s most sought after offering, and one of the most desirable watches of all time.

Really only springing to life post-1988 with the introduction of a self-winding caliber, the brand was obviously keen to make up for lost time. The Daytona started to emerge in a host of different guises in order to appeal to the widest ranging audience possible.

Like the majority of Rolex’s sports models, the Daytona stopped being a tool watch years ago and is now far more likely to be worn as a symbol of personal achievement. As such, it has been constructed from every type of precious metal, including the unsurpassed luxury of pure platinum.

Yet, as with the Yacht-Master, it is the half and half nature of Rolesor that offers everything you could want from a luxury racer’s watch.

One of the best examples comes in the ref. 116523, possibly the most undervalued model in the entire range. Only recently upgraded to the latest ref. 116503, the predecessor is something of a bargain on the pre-owned market and is available with a choice of dials.

Whether you choose the black, white or mother-of-pearl faces, the overall look of the watch is both smart enough to wear as part of business attire, while still not looking out of place on a racetrack.

Best of all, inside ticks Rolex’s own class-leading Cal. 4130, recognized as one of the best automatic chronograph movements ever made. Its vertical clutch gives high precision starts and stops of the seconds hand and ensures timekeeping accuracy to within 1/8thsecond.

It is not too much to say that the Daytona is the most collectible watch in the world right now, and the ref. 116523 represents something of a gateway into a fairly exclusive club. The versatility of the yellow Rolesor styling gives it a multifaceted charm—at home in any situation.

The twin tones of Rolesor have been with us for several generations now and give an intriguing middle option between the functionality of steel and the full-blown opulence of gold. Working together, they give Rolex’s peerless range the look of pieces of jewelry that are tough and resilient enough to be worn everyday—which, really, epitomizes the brand itself.

At Beckertime, you can browse a wide selection of two-tone Rolesor Datejust watches for men. You’ll find great deals and a variety of colorful dials and bezel types from which to choose,