There is a world of difference between a true watch collector and someone who simply owns a few watches. Many people have more than one timepiece, but the horologist (as good a term for a collector of watches as any) is a person who often goes to great lengths to acquire very specific models, usually for very particular reasons.

So who are they? Is this an activity that attracts a certain type of individual over another?

Well, yes and no. At the risk of sparking a debate, the vast majority of hardcore collectors are men. The intricate mechanics inside a luxury watch, much like the practical splendor of the internal combustion engine, is just something that seems to tap into the underlying genetic makeup of the male of the species.

But, other than most of them sharing a gender, the main factor that unites watch collectors is (how can we put this delicately?) a certain level of obsession. If we do away with delicacy altogether, by their own admission, they have a touch of the crazies about them. 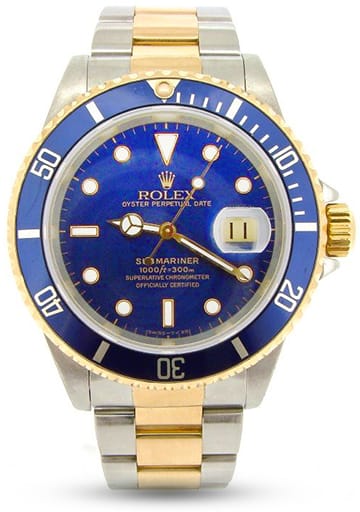 It goes a long way to explaining why someone would pay a sometimes huge premium for a watch with a cracked dial or a faded bezel over a box-fresh, mint condition piece. Or why they are willing to spend significantly more, in the case of the Rolex Daytona for instance, for a model constructed from steel rather than in one of the range of precious metals.

It is an activity driven almost entirely by emotion, with little in the way of logic, and nothing can power emotion more than a good story. Every watch, new or vintage, has a tale to tell. The type, brand, age and condition of each individual piece has something to say. It can link the wearer to a certain time or historical event, and even to a particular person—real or fictional. No one has bought a Rolex Submariner, for example, without at least a subtle acknowledgement in the back of their minds to James Bond.

How Does it Start?

One day I would love someone to do a really in-depth study among watch collectors to see how they all got set along the path. What was the catalyst for their usually lifelong fixation with these tiny wrist machines? I’m guessing that for a disproportionately high percentage of them, it would have all begun with an heirloom being passed down from father to son.

In any event, it was how my (extremely modest) collection got started. My grandfather’s Omega CK ref. 14713, the archetypal retirement gift after his 36 years with British American Tobacco, was obviously passed down to my father and then, when he in turn shuffled off, to me. At 33mm, it looks a little small next to my great banana-fingered hands, but I still wear it on the very odd occasions my wife tells me I have to put a suit on.

It is the great beauty of watches for men, this very personal history wrapped up in each one—an element not lost on Patek Philippe, with their classic advertising campaign, ‘You never actually own a Patek Philippe. You merely take care of it for the next generation’.

For others, it can all start because one piece caught their imagination—something about it just spoke to their individual sensibilities. Usually before pulling the trigger and buying it, they will engage in a certain amount of research, about the watch itself and the brand as a whole, the story will take hold of them and that will be that. To distant cries of, “one of us!”a new watch collector is born.

Of course, a number of people see the activity in mostly financial terms. A watch collection, especially in the current climate, is one of the best places to park money against future returns; as long as you invest in the right ones. Much like the stock market, there is no real ‘sure thing’, with personal taste playing too great a part. There are a number of pieces that could be hesitantly described as surer than others, with certain steel Rolex professional watches out in front. The most successful at the game are those who can spot the models that will become the real classics in years to come. It takes a thorough knowledge of the market and more than a little luck to join those ranks.

That leads on to an interesting question regarding who it is that collects watches and, more precisely, how much money they have behind them. While no one is going to argue that starting a collection wouldn’t be easier with a large amount of cash to throw around (there are, after all, very few occasions in life when that doesn’tmake things easier) it is by no means mandatory. It can simply be a case of working your way up to more valuable pieces in stages, starting with the more accessible and reinvesting any profits made after selling them on.

Building a solid catalog of watches is not, fortunately, the sole preserve of the super rich.

The Thrill of the Hunt

It is a weird phenomenon among a certain type of watch collector that their all-consuming interest in a particular model vanishes the moment they manage to acquire it.

For these people it is the practice of actually tracking down and securing the watch that is the most important thing, more than ownership. Learning all about the brand, doing exhaustive study on the exact piece, liaising with likeminded friends and acquaintances and, finally, winning the watch of their dreams—this is what they live for. And then they are on to the next one.

Maybe it’s a caveman thing, but it is a good explanation as to why no watch collector has ever uttered the words, “Finally! I’ve finished my collection!”

Some collectors stick religiously to one brand, hunting out ever more obscure pieces by the likes of Audemars Piguet or Patek Philippe. These are the people who become, over years of obsessive learning, absolute authorities on their chosen makes and are able to make sense of the sometimes completely incomprehensible minutiae that often goes hand in hand with manufacturers with hundreds of years of history behind them.

Others have a particular fondness for a certain type of complication; whether they are fans of tourbillons, or chronographs, or simple three-hand models.

And of course still others run free and easy with their collection, picking up the ones that appeal to them, regardless of name or function.

Ask any expert though, and they will all tell the budding collector to buy only the pieces they actually like, the ones that speak to them personally and  ignore the ones they feel they shouldgo for, because they might be the important model in the future.

The original question was, who collects watches? There was never going to be a short answer, because the world of horology is too diverse.

There are, however, some characteristics shared between the majority of people who indulge.

The biggest one is their mutual passion. There is no such thing as an apathetic watch collector. It is something that becomes at least a great fixation. In extreme cases, it turns into an addiction.

That is not necessarily a bad thing. There are, after all, worse things to be addicted to. For the collector, there is always one more; another model to add and it can take sometimes years to find.

One thing is definite though. If you were wondering when a good time to start a collection of your own might be, it is now. Average prices for vintage watches have been climbing steadily for years and are only predicted to continue, and with the number of reputable online vendors available at the click of a mouse, such as here at Beckertime, it has never been easier to secure your very first collector’s item.