What’s the Difference? The Rolex Datejust Vs. The Rolex Oysterquartz Datejust -

What’s the Difference? The Rolex Datejust Vs. The Rolex Oysterquartz Datejust

Due to their carefully cultivated reputation, the quality of their output and the rigid efficiency of their engineering processes, Rolex has long stood head and shoulders above other manufacturers. In fact, they are not so much watchmakers now as they are the ultimate aspirational lifestyle brand.

The benefit of being in such a lofty position is that, to a certain extent, the various crises that tend to reduce lesser companies in the industry to dust are more an annoyance to Rolex rather than potential disasters.

The current Smartwatch phenomenon which is giving much of Switzerland sleepless nights is one example. While they are obviously impressive bits of kit, able to do just about anything you could think of, and a dash more, there is no getting away from the fact they are fairly soulless pieces of plastic. An Apple Watch may be able to track your sleep and monitor your heart rate, but is it ever going to be passed down as a family heirloom, with its own unique story to tell?

Rolex and the rest of the mechanical watch firms faced a similar situation in the 70s, when the quartz crisis swept through like a tidal wave, washing away somewhere in the region of two-thirds of traditional manufacturers.

Back then, Rolex and several other of the major Swiss players were forced to band together to try and stem the flood, and 20 of them formed the CEH, or the Centre Electronique Horloger, to build their own quartz movement to rival the cheap, disposable competition from Japan.

The solution that the CEH came up with, while technically innovative and extremely accurate, had several problems, especially for Rolex. Firstly, it was too large and cumbersome to be fitted inside one of their famed Oyster cases, so when the brand’s first ever quartz watch, the ref. 5100 Beta-21, emerged in 1970, the enormous 40mm piece was rated as just ‘water resistant’ rather than waterproof.

And secondly, not only was the Beta-21 movement produced by an outside consortium, anathema to the fiercely independent Rolex, the exact same caliber was being used inside 16 of its direct rival’s watches. Something was going to have to change.

Two years later, Rolex withdrew from the CEH and retreated back to its Geneva compound to develop its own quartz technology.

With their usual glacial pace, it took them five years. In 1977, the brand unveiled a pair of new watches, each powered by its own unique quartz movement. The Cal. 5055 served inside the Oysterquartz Day-Date, the electronic version of the flagship President watch, and the Cal. 5035 drove the Oysterquartz Datejust, a variant on one of Rolex’s longest serving creations.

The Datejust and the Oysterquartz Datejust

It is no surprise that, with an entire catalog to choose from, Rolex selected these two particular models to trial with a quartz engine.

The Day-Date was, and still is, the pinnacle of the range; a watch that signifies excellence and achievement, in any walk of life, perhaps more than any other.

The Datejust, since its debut in 1945, has often been the model used to test many of the brand’s major innovations. When it launched in Rolex’s 40th anniversary year, it became the first waterproof self-winding watch in the world to display a date aperture. A little under a decade later, it became the first to be fitted with the Cyclops magnifying lens.

Since then, it has been rolled out in so many combinations of metal, bracelet, dial and bezel styles that they are nigh on impossible to count.

It has been in unceasing production now for more than 70 years, its at-one-time revolutionary design becoming such an accepted part of horology that it is now considered ageless.

But, although the basic shape has barely altered during the last seven decades, the inner workings have been subject to the relentless pursuit of perfection that has put Rolex so far above its competitors. 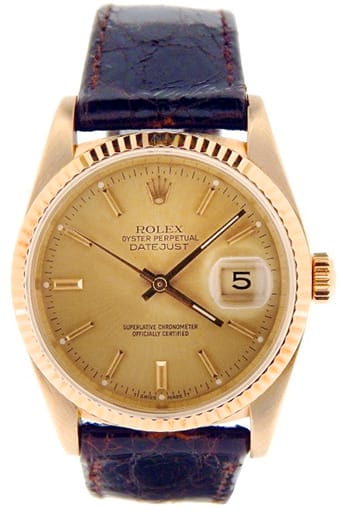 The same year that the quartz powered Datejust emerged, the mechanical model also received a new caliber, the Cal. 3035. Replacing the long running and beloved Cal. 1570, the first of Rolex’s own in-house 3000 series announced the start of the high-beat 28,800bph frequency movements that give the trademark eight beats per second hand sweep. It was also the caliber that introduced the Quickset date function to the traditional range, a breakthrough first seen, at least on a Rolex, on the quartz ref. 5100 Beta-21.

Using the well-proven setup of free sprung balance with a Breguet overcoil, regulated by the proprietary Microstella system, the Cal. 3035 improved even on the outgoing Cal. 1570 in terms of accuracy and reliability.

However, where precision timing was concerned, the gap between it and the new Cal. 5035 inside the Oysterquartz was more like a vast yawning chasm.

A New Set of Standards

Mechanical Rolexes have long worn the COSC-approved Superlative Chronometer Officially Certified text on their dials like a badge of honor. To win it, every watch has to be proven to keep within a mean variance of -4/+6 seconds a day, tested by the Official Swiss Chronometer Testing Institute. In 2015, Rolex decided to make it even tougher on themselves by narrowing the margin to -2/+2 seconds a day.

It is a lot to ask of a bunch of gears and springs, but the standards laid down by the COSC for quartz movements were even more draconian. For the two Oysterquartz models to be able to wear the same badge, they would have to perform to within +/- 0.2 seconds a day.

Rolex actually held off submitting the new pair for certification for 18 months until the calibers reached their second generation, which changed the shape of the quartz crystal in the oscillator circuit to that of a tuning fork. Typically, the company has never released official data on how well the movements did, but it is generally accepted that they kept to within an incredible 50 seconds a year. No mechanical movement, even one of Rolex’s, was anywhere close.

To achieve it, engineers kept, as far as possible, to what they knew. ‘Borrowing’ the bridge, gear train and pallet assembly from the Cal. 3035, the entire escapement is almost identical to the traditional mechanism, with the exception of the pulse motor and electronics. They also fitted an oscillator four times faster than that found on the Beta-21 and a thermistor to regulate the frequency of the quartz crystals vibrations depending on the ambient temperature. The Cal. 5035 and 5055 were among the first thermocompensation movements ever made.

Rolex may have been dragged kicking and screaming into the world of quartz movements, but once committed they stuck to their old adage of ‘if something’s worth engineering, it’s worth over-engineering.’ 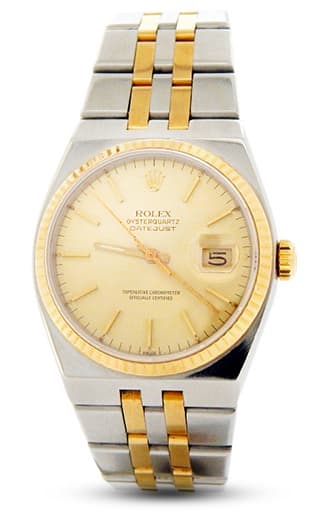 The interior goings-on of the Datejust and its electronic counterpart actually bore more resemblance to each other than the exteriors.

The original piece has always kept its soft lines over the years, with rounded lugs and a gracefully sweeping profile.

For the Oysterquartz Datejust, Rolex stayed with the design motif of the prototype ref. 5100 Beta-21, a piece designed by Gerald Genta, the man responsible for the distinctive Royal Oak from Audemars Piguet. As archetypally 70s as platform shoes and The Sex Pistols, the flowing curves were sacrificed for flat angular surfaces and a unique integrated three-link bracelet.

It was a deliberate attempt by Rolex to make sure that no one was going to mistake the upstart new model with one that had been successfully evolving for decades.

The Options and Numbers

Production of the Oysterquartz Datejust lasted from 1977 through to 2001. As clear an indication of Rolex’s distaste for the new technology as any can be found from the number of watches they produced in that time. Whereas the brand complete around one million mechanical pieces a year, in the near quarter of a century of its involvement with quartz, just 25,000 were made.

Even so, they proved relatively popular, despite the lack of choice compared to the mechanical model, mainly due to the lower price point. While traditional movements demand a particular form of artistry to create, one that has to be paid for, the electronics inside the Oysterquartz models could be had for significantly less.

The two watches may share a name, or at least most of it, but are in reality not particularly similar. The Oysterquartz’s styling is a world away from the accepted Rolex design language, sharing more in common with the Royal Oak or even a Nautilus from Patek Philippe.

The new caliber inside the classic Datejust had brought with it a beautifully smooth seconds hand; the one inside the quartz version jumped like a cheap import.

Today however, the Oysterquartz is becoming increasingly sought after, as the perpetual hunt for the next big thing by collectors continues. The novelty and, of course, the extreme rarity of the Rolex quartz pieces make them highly desirable and even surprisingly attainable.

The standard Datejust is, and will always be, the benchmark by which all other simple three-hand watches are judged. With a range comprehensive enough to suit everyone’s taste and a heritage as faultless as it is possible to get, it is still at the top of any enthusiast’s wish list.