Is there anything that can split an opinion quite like a gold watch? Once seen as the king of precious metals, yellow gold timepieces have been the victims of their own success and now tend to be viewed as either the retirement gift your grandfather was given, or else they are the self-congratulating wrist trophies Wall Street yuppies wore in the eighties—the decade subtlety forgot.

Modern trends have seen people toning down their look, going for the cooler shades of white gold or steel. Yellow gold is sometimes seen as too gaudy, too ‘look-at-me’ for the understated generation.

However, we are talking about a metal that has been used in the finest jewelry for millennia. It has a huge cultural and historical significance. It might, because of the cyclical nature of things, occasionally fall out of fashion and go into hibernation; but yellow gold always comes back into favor.

Yellow gold, it seems, is enjoying a resurgence.

Rolex has been embracing the luxurious qualities of yellow gold since the very beginning. For perhaps the most aspirational brand in the world, it is an obvious choice. It has been a constant presence across the entire range, and today makes up a large proportion of their output, not just in their dress collection, but also in the pieces originally designed to be tool watches.

Models such as the Daytona or GMT-Master may have been created to perform a useful function, but their yellow gold versions now represent the ultimate in casually chic symbols of wealth and achievement.

Here, we’ll take a look at some of Rolex’s finest offerings in that oldest of the precious metals.

The watch with the longest unbroken production run of any in the Rolex stable, the Datejust was released to commemorate the 40thanniversary of the brand in 1945.

Considered the company’s original flagship piece, it was also a major pioneer—the first waterproof, self-winding watch ever made to display a date function. Although examples made in all flavors of precious metal would follow, for the debut reference, the ref. 4467, only yellow gold would do.

Such was, and still is, the popularity and all encompassing appeal of the watch, a Datejust forged in yellow gold is as recognizable a symbol of the Rolex name as the five pointed coronet.

All throughout the watch’s 73-year history, and the only slightly shorter run of the Lady Datejust released in 1957, both models have always had a yellow gold option.

That modest, timeless design has played host to every conceivable bezel, dial and bracelet connotation, and even today, sales of this septuagenarian are formidable.

Over the years, while the outer profile of the Datejust has barely altered, Rolex has continued to innovate, making the sort of relentless, incremental improvements that have long typified the brand and kept them at the pinnacle of the industry. Today’s version make look like a vintage model from times past, but inside, it ranks as one of the most modern and contemporary watches available.

The Datejust is what you buy whether you are the king of watch nerds or your interest in horology extends no further than wanting that one watch you can wear all day, every day, forever, and then pass on to the child who will do the same.

In whatever guise it comes in—yellow, rose or white gold, platinum, steel or Rolesor—it is a watch that transcends fashion.

If you were looking for your one and only Rolex, you’ve found it.

The Day-Date took over the Rolex flagship mantle from the Datejust in 1956 and still holds the distinction today. Unlike the Datejust however, the watch that would go on to be nicknamed the President has only ever been forged from the finest of precious metals.

A solid yellow gold President, particularly on a matching eponymous bracelet, is an extremely bold statement of intent. It is a watch that has been worn by some of the most legendary figures in modern history, including many heads of state and national leaders—hence the name. 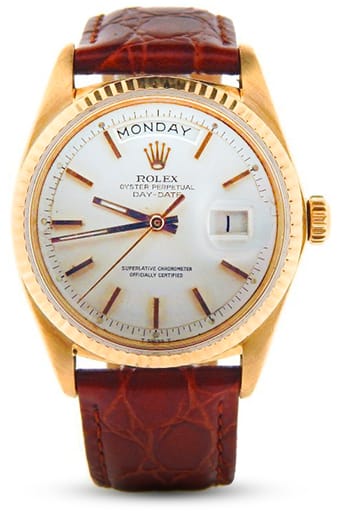 Although it could never be described as the shy and retiring type, Rolex adopted a technique with their all-gold models that would allow them to stand out enough to be noticed, but without ever crossing over into garish territory.

Yellow gold versions of the Day-Date and, in fact, the majority of their colored gold models, feature a mix of both polished and brushed elements. So, while the case, bezel and the bracelet’s center links gleam, the muted top surfaces of the outer links subdues the whole aesthetic, anchoring the look before it can overwhelm completely.

Similarly to the Datejust, the President has never stopped improving. Its twin calendar functions have gone from being adjusted via the hour hand, to a single Quickset to, finally in 1988, the convenience of a double Quickset as Rolex’s drive for technological perfection progressed.

The calibers have developed over the last 60+ years until they have surpassed all industry standards for accuracy and have had to be subjected to the brand’s own merciless tests.

The range of options is almost equal to the Datejust, but without the influence of stainless steel anywhere to be seen, and it too holds a world’s first—the first ever automatic wristwatch to display both the date and the day of the week spelled out in full. The latest models give the choice of any of 26 different languages.

The President, as its unofficial moniker suggests, is Rolex’s crowning achievement. It is the watch worn by those who have definitely ‘made it’, in whatever field of endeavor that might be.

In a catalog not short on status symbols, the Day-Date still ranks as perhaps the most aspirational of them all.

Once upon a time, the Rolex Submariner was a dive watch. Even more than that, it was the dive watch James Bond wore.

In truth, while its credentials still rank it as one of the most capable underwater companions you can buy, it stopped being used for its original intended purpose quite some time ago. 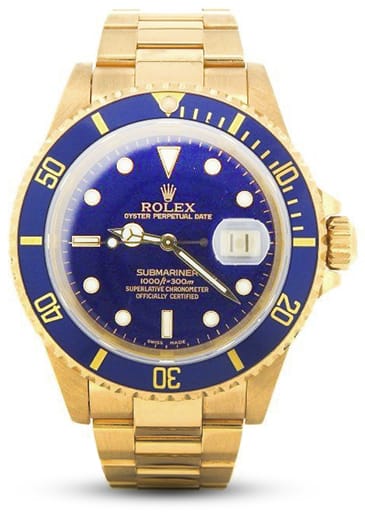 It is fair enough, I suppose. Dive boats, and the sport of Scuba diving itself, offer plenty of opportunities for scuffing, scratching and generally mistreating the sizeable investment Submariner wearer’s carry on their wrists.

These days, you are far more likely to see that iconic design, the most emulated and counterfeited watch of all time, peeking from beneath a well tailored shirt sleeve than strapped over a wetsuit.

The first Sub to emerge in yellow gold was a variant of the ref. 1680 from 1969, a big reference for the model as it was also the first one to feature a date function and, crucially, a Cyclops magnifying lens over the top of it. For many die-hard purists, the introduction of both signaled the end of the watch’s tool-like origins. Why would a diver need to know what day it was anyway?

By then, of course, the Sub had been in production for nearly 15 years, and had been such an astounding success it had spawned countless imitations from rival brands, and Rolex decided to go the ultra luxurious route to appeal to a different, and larger, audience. The steel versions still had the Bond-wannabe market cornered, the gold was for those who had no secret agent longings whatsoever.

The ref. 1680 added some welcome color to the range as well, with the option of a rich royal blue bezel and matching face that contrasted beautifully with the glimmering yellow gold of the case and bracelet. It, and the more understated example with black dial and surround, have remained constants in the Sub family ever since.

Gold’s inherent softness, especially compared to the ruggedness of steel, as well as its costliness, means the precious metal versions of the world’s favorite dive watch are even less likely to go diving than the standard model. But, with the same combination of polished and brushed elements on the bracelet and case, it retains a versatility that looks good in most environments—whether at work or play. The Submariner is such a well-loved creation, it is accepted pretty much anywhere.

It also easily crosses the boundary between what constitutes a man’s or a lady’s watch. Particularly in its yellow gold finery, the Sub’s relatively modest 40mm dimensions are appealing to more and more women; the perfect accompaniment to a range of outfits.

Although its tough as nails origins are still present in its DNA, the Rolex Submariner is now, along with the Datejust, the archetypal brand emblem. The dive watch all others aspire to, in the luxuriousness of yellow gold, it makes an outstanding statement.

At Beckertime, we have a superb range of yellow gold Rolex watches, each with a guarantee of authenticity from our in-house Rolex Certified Watchmaker. Take a look through our online store to find your next favorite watch.