There’s no doubt the dimensions of watches have steadily grown throughout their lifetime. The minute jewelry-like pieces that were once the sole preserve of women took a sizeable leap when the wristwatch became an acceptable male accessory. However, for decades, it was rare for a man’s watch to exceed 34mm, but the introduction of sports models, which out of necessity could measure 40mm+, started knocking that average ever upward.

From the late 50s to early 60s, 36mm became the new standard and remained so until relatively recently.

The trend of the last few years for brands to launch bigger and bigger watches is similar to the great Nikon Vs. Canon battle of the earliest days of the digital camera—two companies shoehorning more and more megapixels into their sensors until they went beyond what anybody wanted or needed. That conflict eventually petered out and it could be that watch sizes are following the same pattern. This year’s Baselworld saw a slew of new and updated models actually taking a step back in size, returning to more manageable, vintage-inspired proportions.

Today, a 36mm watch is seen as very much a unisex piece. The current Rolex catalog only has a couple of models listed in what they now call the mid-size, and you will find them featured in both the men’s and women’s ranges.

The archives of course are filled with the real gems, drawn from Rolex’s long and illustrious history.

Below, we’ll take a look at some of the exceptional 36mm watches in the lineup.

With perhaps the exception of the Submariner, the Rolex Datejust is most often the first watch that springs to mind when people hear the name Rolex.

A rock-solid mainstay in the collection since its launch in 1945, it stuck faithfully to its 36mm dimensions all the way up until 2009, when it finally bowed to convention and was joined by a 41mm sibling called, unsurprisingly, the Datejust II. 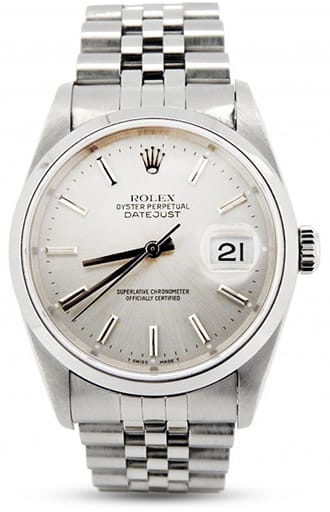 Yet, while many appreciated the bump up in size, Rolex also decided to enlarge the hour indexes and the thickness of the bezel, leaving the Datejust II without the elegantly balanced proportions of the original.

Consequently, it was a rather short-lived outing, and was replaced a few years later with the Datejust 41, the same size on paper but with a return to the trademark graceful lines of the original.

With an unbroken production run stretching back now over 70 years, there are an extraordinary number of 36mm Datejusts available on the pre-owned and vintage market. It is the watch that has acted as a test bed for a host of Rolex’s innovations and has been constructed in as many different combinations of metal, dial, bezel type and bracelet as there are grains of sand on the beach.

It remains one of the brand’s top sellers, and the bewildering range of styles, coupled with the understated dimensions, make it at least as popular as a ladies watch as a man’s.

There is something about the design of the Datejust that grants it entry into just about anywhere, regardless of whatever particular configuration it comes in. Whether it is an unassuming steel monochrome or a diamond-accented yellow gold, it never seems either underdressed nor ostentatious.

A model that no Rolex collection is complete without, and the one that first put the brand on the map, the 36mm Datejust is a slice of horologic perfection.

The watch that stole the flagship crown from the Datejust just 11 years into its run has mirrored much of its progression over the subsequent decades.

Available exclusively as a 36mm piece for the majority of its time to date, the Rolex President was also given a badly-received 41mm companion in 2008. The Day-Date II suffered from the same downfalls that afflicted the Datejust II a year later—namely the once refined styling elements made to look chunky and workmanlike. And, again like the Datejust II, it didn’t hang around very long before being displaced. 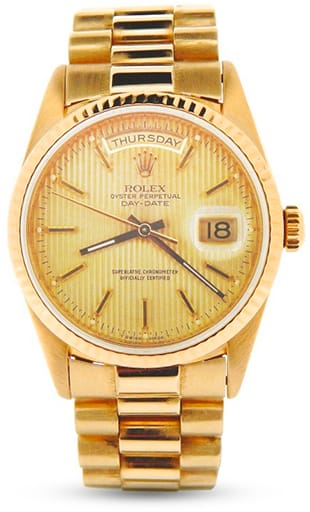 The Day-Date 40 emerged in 2015 with its proportions restored to their best and sitting on a slightly smaller 40mm case.

Regardless of its size, the President has always been an unashamedly elitist creation, only ever made from the finest precious metals—all three of Rolex’s favored gold varieties along with the shimmering white of pure platinum. Consequently, its higher buy-in price has long made it the more exclusive option; a watch that represents the ultimate in aspiration and achievement.

Also similarly to the Datejust, the Day-Date has a real chameleonic quality. While it has never been sullied by anything as commonplace as stainless steel, not even in a Rolesor half and half version, it has almost matched the diversity of its older stable mate. It is a watch for those who have reached the pinnacle of any profession; whether they are the commander-in-chief, the chairman of the board or a top sports star, musician or actor.

Subsequently, its range of styles runs the gamut—the white gold and platinum pieces make a more lustrous alternative to steel, while still keeping an under-the-radar wrist presence welcomed in any boardroom. For those who are comfortable performing center stage, the President can equal just about any level of flamboyance, with jewel-encrusted surfaces or the retina-threatening luridness of the Stella dials.

Less humble than the Datejust but just as emblematic, the Day-Date is another watch from the old school that remains as beloved as ever.

Rolex’s brief foray into the murky world of quartz technology left us with two pieces based on the previous pair of watches we’ve looked at here, which demonstrate an interesting point about case sizes.

The Oysterquartz Datejust and Day-Date are 36mm models which wear far larger than their numbers would suggest.

The quintessentially 70s style integrated bracelet on both gives them the appearance of being much bigger watches. It is a common optical illusion manufacturers have often used to give their designs more impact without actually increasing the size and it’s an effect that can be created with a number of elements. 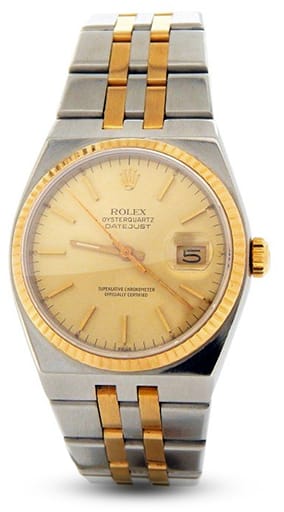 Rolex’s latest iterations of the Submariner and Explorer II, for example, have what is called a Maxi case—still the time-honored 40mm diameter but made to look bigger by beefing up the lugs and winding crown. Enlarging the size of the hands and hour markers has a similar effect, another technique Rolex use which they call the Maxi dial. With bracelets, a leather strap slims down a watch’s look, while the nature of metal will always make it seem larger and heavier, and one that is incorporated directly into the case will appear bigger still.

For the Oysterquartz watches, their pointed, angular facade was perfect, both to highlight the cutting-edge qualities of the technology within as well as to offer a complete visual separation from their mechanical namesakes.

Released in 1977, they were Rolex’s reluctant answer to the quartz crisis that was decimating the Swiss luxury watch industry all around them. Very much a product of their time styling-wise, inside, the quartz calibers were so overly engineered, in a way only Rolex can manage, that even today they still rank as some of the most accurate movements ever made.

In recent years, with the rise in popularity of both vintage Rolex and larger watch sizes, the Oysterquartz Day-Date and Datejust are enjoying a resurgence. There seems to be a mini seventies revival occurring, with even a root beer-inspired bezel cropping up on the latest GMT-Master II.

The quartz-driven Rolexes offer a quirky and surprisingly affordable alternative to the more obvious brand choices, with a healthy dash of nostalgia thrown in.

A 36mm watch was the ideal male standard for several generations, and is still the best choice for those with smaller wrists.

These days they complement just as many female outfits, and some credit the fact that more women started to wear 36mm pieces as the driving force behind the massive increase in men’s watch sizes.

Regardless, with Rolex’s colossal back catalog of models in the range, there is a 36mm piece to suit every taste. Check out our wide selection of used Rolex watches at BeckerTime to find your perfect fit.